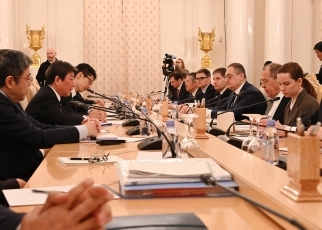 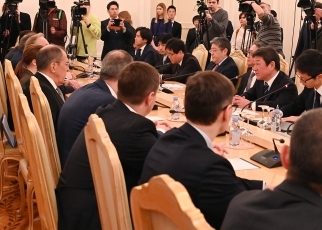 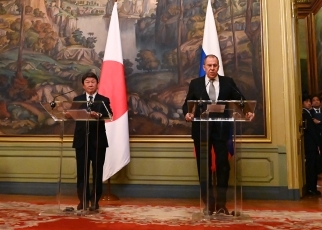 1. Bilateral relations (including the issue of concluding a peace treaty)

(1) Negotiations on a peace treaty

Minister Motegi and Minister Lavrov held discussions at length and were able to commence full-fledged consultations. Minister Motegi conveyed his own thoughts on the way to proceed with the consultations in order to advance the negotiations based on the instructions of both leaders, while taking into consideration the talks that have taken place to date. With respect to measures to fill the gap between the basic positions of both sides, the two Ministers conducted an in-depth discussion in putting their wisdom together.

The two Ministers appreciated the holding of the experts’ meeting on “tourism,” “garbage disposal,” and “fishery industry” early this month, with a view to conducting full-fledged projects from next year while taking into account the results of the pilot projects held this year. The two Ministers also confirmed the way forward for future consultations. Furthermore, the two Ministers shared the view on holding a director-general-level working group meeting for comprehensive discussions in January of next year.

Minister Motegi appreciated the cooperation by the Russian side, mentioning this year’s realization of grave visits by airplane for the third consecutive year and realization of visits to graveyards that could not be visited for many years. In addition, Minister Motegi conveyed his request about visits in the next fiscal year, and Minister Lavrov stated that the Russian side understands the importance of humanitarian measures and expressed a positive attitude, showing that Russia will continue to cooperate with Japan.

Regarding the so-called “escort” and “arrest” of Japanese fishing boats which were operating under the “Agreement between the Government of Japan and the Government of the Russian Federation on some matters of cooperation in the field of fishing operations for marine living resources,” Minister Motegi lodged a protest claimed for the prompt return of the crews and boats to the port from a humanitarian perspective as well.

The two Ministers welcomed that defense exchanges were held actively. Regarding ensuring the safety of vessels and aircrafts, the two Ministers confirmed that they will continue to work toward the signing of the protocol to amend the Agreement on Incidents Prevention at Sea taking into account that the protocol has been agreed in principle, following the discussions at the working level.

The two Ministers confirmed the realization of various bilateral cooperation, including countering narcotics. They shared the view that, in order to open up the potential of Japan-Russia relations, they will explore new fields of cooperation in Central Asia and other areas, including counter-terrorism cooperation, and hold a series of consultations.

The two Ministers agreed to arrange the next Foreign Ministers’ Meeting on the occasion of the Munich Security Conference, if circumstances permit.

Minister Motegi provided an overview of the meeting of the Intergovernmental Committee on Trade and Economic Issues co-chaired with H.E. Mr. Oreshkin, Minister of Economic Development of Russia, on December 18. Minister Motegi and Minister Lavrov confirmed that Japan and Russia will cooperate for strengthening their mutually beneficial economic relations and further promotingpeople-to-people exchanges. Minister Motegi urged that both sides would make efforts to materialize concrete achievements one by one, in order to elevate the overall trade and economic relations, such as through initiatives relating to the eight-point Cooperation Plan, including cooperation in the Far East. In addition, Minister Motegi expressed his intention to further build up the momentum for the exchanges, making use of the Japan-Russia year of regional exchanges that begins from the next year, and the Russian side concured.

Regarding pressing international affairs, including North Korea issues and the situation of the Middle East, candid discussions took place amid various developments in light of the latest situation.