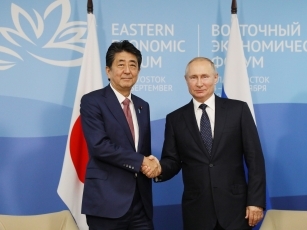 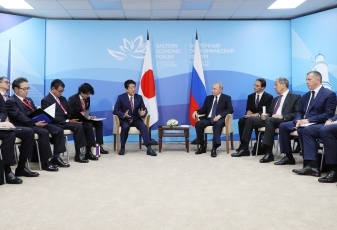 On September 5, Mr. Shinzo Abe, Prime Minister of Japan, visited Vladivostok in the Russian Federation to attend the Eastern Economic Form, and held his 27th Japan-Russia Summit Meeting with H.E. Mr. Vladimir Vladimirovich Putin, President of the Russian Federation. The overview of the meeting is as follows (plenary meeting for approximately 1.5 hours in total, including a one-on-one meeting for approximately 20 minutes).
Both leaders confirmed to hold their next Summit Meeting on the occasion of the Asia-Pacific Economic Cooperation (APEC) Economic Leaders’ Meeting in Chile in November.

(1) Negotiations on a peace treaty

(2) Cooperation between coast guard authorities: Visit of the Commandant of the Japan Coast Guard, Admiral Iwanami to Russia and the holding of the Japan-Russia Coast Guard Meeting (July); and the second Coast Guard Global Summit (November, Tokyo).