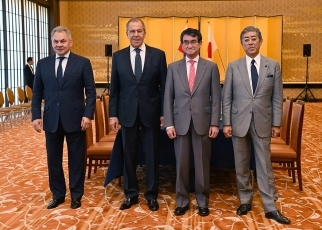 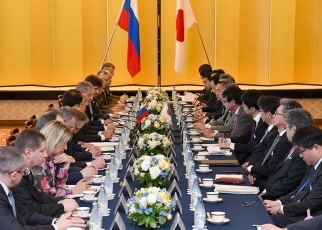 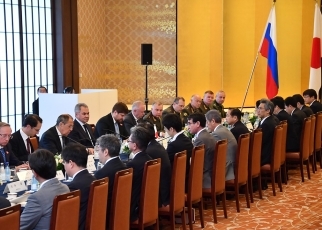 On May 30, Mr. Taro Kono, Minister for Foreign Affairs, and Mr. Takeshi Iwaya, Minister of Defense, held a Japan-Russia Foreign and Defense Ministerial Consultation (“2+2” Ministerial Meeting) with Mr. Lavrov, Sergey Viktorovich, Minister of Foreign Affairs of the Russian Federation, and Mr. Shoygu, Sergey Kuzhugetovich Minister for Defense of the Russian Federation. The overview of the meeting is as follows. ( for approximately 3hours and 15 minutes, including a working dinner).

1. Confidence building between Japan and Russia in the field of security

The ministers welcomed the recent successful visit to Russia by the Chief of Staff of the Japan Ground Self-Defense Force (JGSDF). It was confirmed that joint Japan-Russia Search and Rescue Exercises (SAREX) will take place in Vladivostok in mid-June and that towards the end of the year a Russian naval commander will visit Japan. The ministers also confirmed that the JGSDF Central Band will take part in the “Spasskaya Tower International Military Music Festival ” in Moscow this coming summer.

With regard to cooperation on responses non-traditional threats, such as in the field of counter-narcotics, the ministers shared the view that positive cooperation outcomes are being built up between Japan and Russia in this area.

The ministers exchanged opinions about the latest developments relating to North Korea, and Minister Iwaya pointed out that the launch of a short-range ballistic missile by North Korea on May 9 was a clear violation of United Nations Security Council (UNSC) resolutions. The ministers confirmed that Japan and Russia will continue to cooperate on achieving the denuclearization of North Korea which is a common goal for both countries.

In the course of discussions on regional affairs the Japanese ministers conveyed their wishes to continue to engage in dialogue with Russia in order to realize the vision for a “free and open Indo-Pacific.”

The ministers exchanged the views about a range of urgent international issues including Iran, Syria, Ukraine, Venezuela, and nuclear disarmament and non-proliferation.