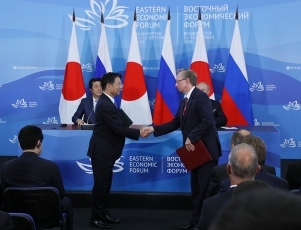 1. On September 10, 2018, in Vladivostok, Russia, diplomatic notes for the entry into force of the Convention between the Government of Japan and the Government of the Russian Federation for the Elimination of Double Taxation with Respect to Taxes on Income and the Prevention of Tax Evasion and Avoidance (signed on September 7, 2017) was exchanged between Mr. Toyohisa Kozuki, Ambassador of Japan to Russia and Mr. Mikhail Y. GALUZIN, Ambassador of Russia to Japan.

2. The Convention, therefore, will enter into force on October 10, 2018, on the thirtieth day after the date of exchange of diplomatic notes and will have effect:

(a) with respect to taxes levied on the basis of a taxable year, for taxes of any taxable years beginning on or after January 1, 2019; and

(b) with respect to taxes levied not on the basis of a taxable year, for taxes levied on or after January 1, 2019.

(c)The provisions concerning the exchange of information and the assistance in the collection of taxes have effect from October 10, 2018, without regard to the date on which the taxes are levied or the taxable year to which the taxes relate.

The foregoing is a provisional translation. The above date denotes the date of the issue of the original press release in Japanese.