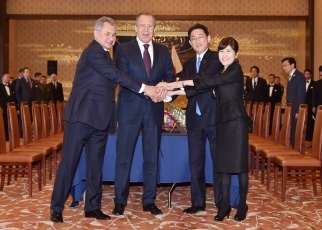 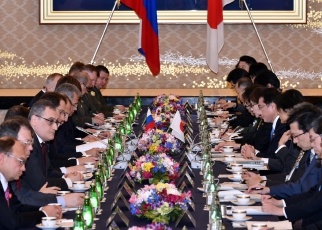 On March 20, by Mr. Fumio Kishida, Minister for Foreign Affairs, and Ms. Tomomi Inada, Minister of Defense, held a Japan-Russia Foreign and Defence Ministerial Consultation (“2+2” Ministerial Meeting) with H.E. Mr. Sergey Viktorovich Lavrov, Minister of Foreign Affairs of the Russian Federation, and H.E. Mr. Sergey Shoygu, Minister for Defense of the Russian Federation. This was held as second meeting since November 2013. The two sides agreed to continue holding such meetings in the future and that the next “2+2” Ministerial Meeting shall take place in Russia. The overview is as follows.

1. The Security Situation in the Asia-Pacific Region

The ministers agreed to strongly urge North Korea to refrain from further provocations and to comply with United Nations Security Council resolutions and other agreements. They also confirmed that Japan and Russia will cooperate closely, including at the United Nations. The ministers also agreed that Japan and Russia will work together on outreaching to North Korea and China through candid discussions.

The Russian side stated that the MD systems deployed by the United States creates the risk of regional instability and its capacity is excessive to deal with North Korea's missile threat. Defense Minister Inada explained that Japan is deploying MD system in order to response to the grave and imminent threat from North Korea and it does not be a threat to Russia.

(3) The South China Sea and the East China Sea

2. Confidence-Building between Japan and Russia in the Realm of Security

Both Japanese ministers stated that deployment of surface-to-ship missiles in the Northern Territories is regrettable and inconsistent with Japan's stance on the Territories. Defense Minister Inada expressed concerns over growing activities by Russian military aircraft around Japan.

Both Japanese ministers expressed concerns that if Defense Minister Shoygu's statement concerning the deployment of new military unit by Russia on the Kuril Islands and the Four Northern Islands is true, then it would be incompatible with Japan's position.

The ministers agreed to continue working-level talks, exchanges between military units and joint search-and-rescue exercises between Japanese and Russian defense authorities. They also agreed to continue to arrange a port call in Russia by the Japan Maritime Self-Defense Force Training Squadron in this year.

Both sides agreed on accelerating cooperation in security regarding "non-conventional threats" like counterterrorism and counter-narcotics based on the achievements undertaken thus far.