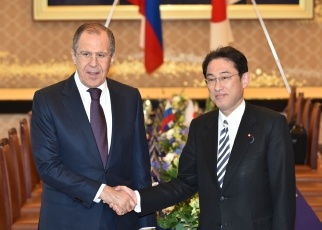 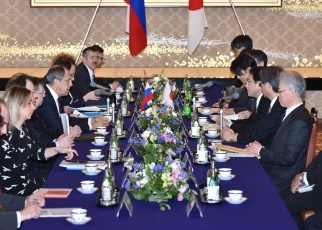 On Friday, April 15, commencing at 3:30 p.m. for approximately one hour and 50 minutes, Mr. Fumio Kishida, Minister for Foreign Affairs, met with Mr. Sergey Viktorovich Lavrov, Minister of Foreign Affairs of the Russian Federation at the Iikura Guest House. They subsequently held a joint press conference and then had a working dinner for approximately an hour and a half until just after 8 p.m.

(1) The two Foreign Ministers welcomed the active dialogue taking place between Japan and Russia, including at the summit level, and agreed to move forward earnestly with adjustments and preparations, including setting a detailed schedule, ahead of an unofficial visit to Russia by Mr. Shinzo Abe, Prime Minister of Japan, in the near future. They also confirmed their intention to move ahead with preparations for a visit to Japan by Mr. Vladimir Vladimirovich Putin, President of the Russian Federation, with the aim of achieving results in a variety of fields, such as political matters, which include negotiations on the conclusion of a peace treaty, economic affairs, and culture.

(2) Foreign Minister Lavrov commented that he hopes to advance Japan-Russia relations in all respects and expressed his sympathies to the victims of the Kumamoto Earthquake that occurred on April 14.

(3) Interactions between both Parliamentarians and Parliaments in 2016 are vibrant and include the visit to Russia by Mr. Masahiko Komura, Vice-President of the Liberal Democratic Party, and Ms. Tomomi Inada, Chairman of the Policy Research Council of the Liberal Democratic Party, and the planned visit to Japan in June by Mr. Sergey E. Naryshkin, Chair of the State Duma of Russia. The two Foreign Ministers agreed that this type of interaction is meaningful for the promotion of mutual understanding.

(1) On the issue of concluding a peace treaty, following up the discussions at the Japan-Russia Foreign Ministers’ Meeting in September 2015, the two Foreign Ministers engaged in a constructive discussion which gives an impetus on future negotiations, with the goal of creating solutions that are acceptable for both sides.

(2) Based on the discussion, the two Foreign Ministers agreed to conduct negotiations on concluding a peace treaty, which are ongoing, as soon as possible after the visit by Prime Minister Abe to Russia, in accordance with instructions by the leaders of Japan and Russia, and to adjust schedules through diplomatic routes.

3. Other aspects of the bilateral relationship

The two Foreign Ministers agreed to conduct discussions related to the security field by high-level officials from both Foreign Ministries from the perspective of confirming mutual security policies and awareness of conditions.

ⅱ. Foreign Minister Kishida, in regard to the law on alternatives to salmon/trout driftnet fishing, requested cooperation from the Russian side in discussions related to the specific format for fishing in order to obtain fishing opportunities in Russian waters from this year. In addition, he requested early elimination or easing Russian import regulations on Japanese fishery products after the Great East Japan Earthquake and to increase the number of facilities that is able to export Japanese beef.

The two Foreign Ministers agreed that cultural, human, and youth exchanges are meaningful from the standpoint of promoting mutual understanding among the peoples of Japan and Russia. Foreign Minister Kishida explained that Japan is reviewing strategic easing of visa restrictions to stimulate human exchanges to countries including Russia.

The two Foreign Ministers confirmed the importance of smooth implementation of each program, such as visits to graves in the Northern Territories, Free visits, and the Four islands Exchange program, including from a humanitarian perspective.

Regarding the Siberia detention issue, Foreign Minister Kishida commented that Japan hopes to continue to receive cooperation from the Russian side on provision of related materials, such as lists of the people who died and burial sites, and Foreign Minister Lavrov consented to the request.

Foreign Minister Kishida noted that it is necessary to implement the Minsk Agreements by all sides in order to improve the situation in Ukraine and called on a constructive response from the Russian side.

The two Foreign Ministers agreed that North Korea’s nuclear test and ballistic missile launch pose a threat to the entire international community and that Japan and Russia will work together in strongly urging North Korea to refrain from further provocative actions. Foreign Minister Kishida noted that pressure on North Korea should be strengthened through strict implementation of the recently adopted Security Council resolution and that Japan hopes to cooperate for the realization of a comprehensive solution to the nuclear, missiles, and abductions issues, and Foreign Minister Lavrov commented that Russia shares strong concerns about North Korea and that it hopes to continue cooperation with Japan.

Regarding the situation in Syria, the two Foreign Ministers agreed that it is necessary to advance discussions with the Syrian Government and anti-government groups under the auspices of the United Nations and to reach a political solution.