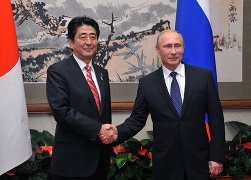 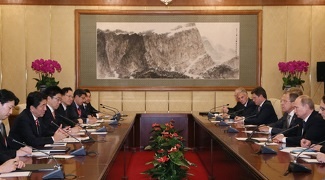 On November 9, commencing at 9:30 p.m. (Beijing time) for approximately 90 minutes, Prime Minister Shinzo Abe held a summit meeting with Vladimir Vladimirovich Putin, President of the Russian Federation in Beijing during his visit to attend the APEC Summit Meeting. (The meeting included an approximately 10-minute exchange between the leaders only at the end). With the first term of the Abe Administration, this was the 10th meeting between them. It was the first time since the summit meeting held in Sochi in February that the two leaders had met with sufficient time. They held discussions in a relaxed atmosphere and their personal relationship of trust was maintained and reconfirmed.

At the beginning of the meeting, President Putin mentioned that he attended a martial arts demonstration in Moscow by a Japanese martial arts delegation, and conveyed his gratitude for the dispatch of the delegation. Additionally, he told martial arts were a major component of Japanese culture, and Japanese culture was the best foundation for developing bilateral relations, which had been advancing extremely favorably in the economic and political fields in recent years. President Putin also mentioned that the political field here includes the resumption of negotiations on concluding a peace treaty. Furthermore, He added he was glad to jointly analyze all aspects of the cooperative relations between Japan and Russia with Prime Minister Abe during the APEC Summit Meeting.

In response, Prime Minister Abe said he was happy to see the President following the meeting on the margins of the ASEM, and said including his first Administration this is their 10th meeting. Prime Minister Abe also thanked President Putin for attending the martial arts demonstration by the Japanese martial arts delegation, and said President Putin’s understanding of judo, as a judo player, and understanding of Japan was important to the development of Japan-Russia relations. Prime Minister Abe mentioned that he was eager to exchange views on Japan-Russia relations overall and the international situation with enough time.

The two leaders shared the view that they would start preparations for a visit to Japan by President Putin at an appropriate time next year. In preparation for the visit, it was decided that foreign vice-minister-level consultations and other dialogues would be held, and a visit to Russia by Mr. Fumio Kishida, Minister for Foreign Affairs, would continue to be considered.

3. Issue of concluding a peace treaty

Prime Minister Abe expressed his views on how to proceed the negotiations on concluding a peace treaty , centering on moving ahead based on the joint statement (PDF) of April 2013, and exchanged views frankly with President Putin.

The two leaders confirmed that practical cooperation between Japan and Russia had been advancing since the Japan-Russia summit meeting held in Sochi in February. It was pointed out that in the economic relations , cooperative projects were being carried out in the fields such as urban environments and Far East agriculture, for example. And in cultural and sports exchanges, the Japanese martial arts delegation was currently visiting Moscow as a centerpiece event of the Japan-Russia Martial Arts Exchange Year, and in addition, next week the World SAMBO Championships would be held in Japan.

(1) Regarding the situation in Ukraine, Prime Minister Abe expressed grave concern that the so-called “election” held by separatists in Eastern Ukraine was complicating the situation, and strongly called on Russia to play a constructive role in the complete fulfillment of the ceasefire agreement and in improving the situation. In response, President Putin explained the Russian side’s position.

(2) In addition, the two leaders frankly exchanged the views on the fight against terrorism, including the ISIL problem, and the situation in Asia including North Korea.