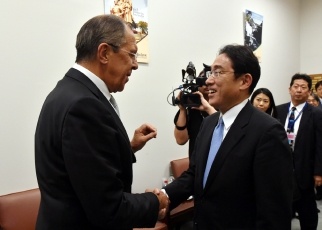 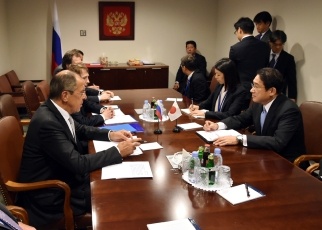 On Wednesday, September 21, commencing at 6:00 p.m. (7:00 a.m., Thursday, September 22, Japan time) for approximately 30 minutes, Mr. Fumio Kishida, Minister for Foreign Affairs, who was visiting New York, the United States of America on the occasion of the United Nations General Assembly (UNGA), held a Foreign Ministers' Meeting with H.E. Mr. Sergey Viktorovich Lavrov, Minister of Foreign Affairs of the Russian Federation. The overview is as follows.

1 Preparations for President Putin’s visit to Japan (future political dialogue, and the issue of concluding a peace treaty)

The two sides shared the view that ahead of the visit to Japan by H.E. Mr. Vladimir Vladimirovich Putin, President of the Russian Federation, which is scheduled for December, they will energetically proceed with preparations in fields such as politics, including the issue of concluding a peace treaty, and economics.
As one step in the preparations for this presidential visit to Japan, it was decided that coordination will take place to bring about a visit to Russia by Minister Kishida, while considering the circumstances of the Diet, to meet with Foreign Minister Lavrov before the presidential visit to Japan. Additionally, the two sides confirmed that preparations in the economic field will also move ahead by having Mr. Igor Ivanovich Shuvalov, First Deputy Prime Minister of the Russian Federation, visit Japan and holding a meeting of the Japan-Russia Intergovernmental Committee on Trade and Economic Issues in Tokyo by November. Furthermore, from the standpoint of achieving even closer dialogue between the diplomatic authorities, the two sides shared the view that a schedule will be coordinated for a Japan-Russia Strategic Dialogue between Mr. Shinsuke Sugiyama, Vice-Minister for Foreign Affairs of Japan, and Mr. Vladimir Gennadievich Titov, First Deputy Minister of Foreign Affairs of Russia.

(2) Issue of concluding a peace treaty

Minister Kishida emphasized the need to try to advance the issue of concluding a peace treaty. The two foreign ministers confirmed that based on the exchanges at the Summit Meeting in Vladivostok, preparations will also move ahead with regard to this issue in the run-up to the presidential visit to Japan.

The two sides confirmed that Japan and Russia will collaborate with regard to the situations in North Korea, including at the UN, beginning with efforts to adopt a new UN Security Council (UNSC) resolution. Minister Kishida emphasized that pressure on North Korea should be strengthened to change North Korea's behavior, and a UNSC resolution that includes new sanctions should be utilized to send a powerful message that further provocative actions of any kind will not be tolerated. Minister Kishida stated that Japan hopes to collaborate with Russia to that end, while also noting the importance of promptly resolving the abductions issue. In response, Foreign Minister Lavrov stated that Russia will also engage earnestly with work on adopting a new UNSC resolution.

Minister Kishida explained that he is concerned that the recent ceasefire agreement in Syria that was reached through vigorous discussions between the United States and Russia is in jeopardy, and he is anxious that progress is not being made with the most pressing challenge of improving humanitarian access. Minister Kishida expressed the view that at this important phase, all sides and relevant countries should make efforts to realize the ceasefire and humanitarian access, and he called on Russia to make a constructive response also. In response, Foreign Minister Lavrov mentioned the recent ceasefire agreement and stated that all sides need to cease hostilities.

As an individual bilateral matter, Minister Kishida explained that he attaches importance to cooperation in the fisheries field, and hopes that Russia's Ministry of Foreign Affairs will also pay attention to domestic coordination in order to ensure the industry can continue operating sustainably under the existing frameworks.