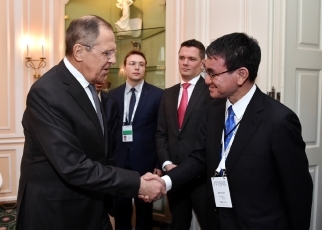 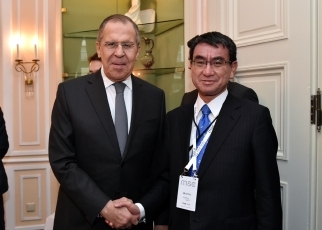 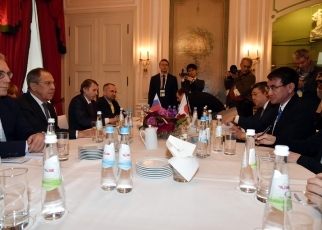 On February 16, on the occasion of the Munich Security Conference, Mr. Taro Kono, Minister for Foreign Affairs of Japan, held Japan-Russia Foreign Ministers’ Meeting with Mr. Sergey Viktorovich Lavrov, Minister of Foreign Affairs of the Russian Federation, for approximately 45 minutes. It was the fourth meeting following the visit to Russia by Minister Kono in November last year.

The ministers shared the view that they will collaborate closely in order to realize fruitful outcomes at Prime Minister Abe’s visit to Russia, which may take place in May.
Additionally, they confirmed that they will hold the next Japan-Russia Foreign Ministers’ Meeting in Japan on March 21.
Furthermore, with regard to cooperation in the field of security, the ministers discussed concretely measures to deal with “non-conventional threats” including counter-narcotics cooperation.

2 The Issue of the Northern Territories

The two ministers appreciated the outcomes at the Japan-Russia vice-ministerial consultation on February 6. They shared the view that they will instruct officials to further accelerate works in order to give shape to the candidate projects.

They confirmed in principle that the next meeting of the Director-General-level working group will be held prior to the Japan-Russia Foreign Ministers’ Meeting in March and both sides will move ahead with coordinating the meeting. Furthermore, they shared the view that after the intensive discussion at the working group, they will hold further discussion in preparation for the Summit Meeting that may take place in May.

Minister Kono encouraged Minister Lavrov to continue to implement humanitarian measures for the former island residents, including special grave visits by airplane this year and beyond, and Minister Lavrov promised to consider this matter.

Minister Kono referred to the designation of the airport on Etorofu Island as being for both military and civilian use on February 1 and military exercise against terrorism on Kunashiri Island, and noted that such acts will lead to a military build-up by the Russian Forces on the Four Northern Islands. Minister Kono protested that such acts are inconsistent with Japan’s stance on the Northern Territories and regrettable.

Minister Kono and Minister Lavrov explained each position on the North Korea problem, and the two ministers shared the view that Japan and Russia will continue to collaborate on this issue.