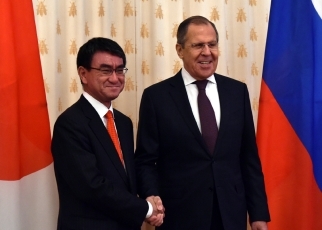 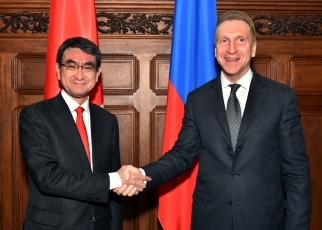 On November 24, Minister Kono held a Japan-Russia Foreign Ministers’ Meeting with Mr. Sergey Viktorovich Lavrov, Minister of Foreign Affairs of the Russian Federation, commencing at 11:10 a.m. (local time; the same hereafter) for approximately an hour and a half, followed by a joint press conference and then a working lunch.

In addition, on November 24, Minister Kono held the 13th Meeting of the Japan-Russia Intergovernmental Committee on Trade and Economic Issues with Mr. Igor Ivanovich Shuvalov, First Deputy Prime Minister of the Russian Federation, commencing at 3:00 p.m. for approximately two hours and 45 minutes, followed by a joint press statement.

The overview of each meeting and other events is as follows.

The two ministers confirmed the major developments in Japan-Russia relations as a result of close dialogue between the two leaders. In addition, in order to continue to hold candid discussions between the ministers the two sides shared the view that they will hold a foreign ministers’ meeting in Japan in order to prepare for Prime Minister Shinzo Abe’s visit to Russia, which may take place in May next year.

Furthermore, the two sides shared the view that a Japan-Russia vice-ministerial consultation will be held sometime between late January and February next year.

(2) Issue of the Northern Territories

i. Joint economic activities on the Four Northern Islands

The two ministers confirmed the specific way of the further work on joint economic activities in order to give shape to the candidate projects toward next spring in a form that does not harm the legal positions of either side. They also shared the view that they will instruct officials to further accelerate that work.

Furthermore, they shared the view that a plenary meeting of the Director-General-level working group on details of the projects and the movement of people will be held in mid-December.

Minister Kono encouraged Minister Lavrov to continue the special grave visits by airplane next year and beyond. The two sides confirmed that they will hold discussions at the Japan-Russia vice-ministerial consultation for the purpose of implementing improvement measures, including the special grave visits by airplane and the establishment of temporary additional entry/exit points.

(3) Cooperation in the field of security

The two ministers shared the view that they will start to cooperate in dealing with “non-conventional threats,” such as measures to counter terrorism, narcotics, money laundering and corruption. They welcomed a decision to dispatch personnel from Ministry of Foreign Affairs of Japan to the United Nations Office on Drugs and Crime (UNODC) as an example of this cooperation.

Minister Kono emphasized that in order to achieve denuclearization of North Korea, which is a common goal of Japan and Russia, it is essential to ensure full implementation of the relevant UN Security Council (UNSC) resolutions. The two ministers confirmed that Japan and Russia will continue to collaborate closely on this issue.

Minister Kono outlined the Japanese humanitarian aid for Syria. He expressed expectations for cooperation between the United States and Russia in order to advance the Geneva process. Minister Lavrov explained Russia’s view on the latest situation.

(1) In the meeting with the participation of government officials, Minister Kono and First Deputy Prime Minister Shuvalov affirmed the importance of bringing the Tax Convention promptly into force and of further utilizing the Japan-Russia joint investment framework. Japan called on Russia to lift import restrictions on Japanese fisheries products and food that were implemented following the Great East Japan Earthquake. In addition, Japan pointed out the potential of cooperation in the Russian Far East, which is one of the eight areas of the Cooperation Plan Prime Minister Shinzo Abe proposed. The two sides also concurred in proceeding with the cooperation in the Far East.

(2) In the extended meeting, a discussion on further realizing mutually beneficial cooperation in specific fields took place. In addition, with regard to the Japan/Russia Year in 2018, Minister Kono confirmed cooperation with First Deputy Prime Minister Shuvalov, who serves as chair of the Russian-side’s organizing committee, toward its success.

(1) Visit to the Bolshoi Theatre

On the evening of November 24 Minister Kono and First Deputy Prime Minister Shuvalov visited the Bolshoi Theatre, where the opening event for the Japan-Russia exchange years will be held on May 26 next year. They watched Prokofiev’s ballet “Romeo and Juliet.”

On November 25 Minister Kono held a breakfast meeting with local representatives of Japanese companies. They exchanged views on topics such as recent business activities in Russia, the current situation of bilateral exchange programs and Japan-Russia economic relations.

(3) Visit to a Japanese graveyard

On the morning of November 25 Minister Kono visited a Japanesegraveyard located in the Donskoy Cemetery in the city. Minister Kono gave a silent prayer and offered flowers for the Japanese citizens buried in the graveyard.

(4) Meeting with people to be involved in the “Japan Year in Russia”, and visit to the Pushkin Museum of Fine Arts

On the afternoon of November 25, Minister Kono held a meeting with people to be involved in the “Japan Year in Russia,” which is scheduled for next year. Following that, Minister Kono visited the Pushkin State Museum of Fine Arts and saw the status of the preparation for the exhibitions that will be held in the Japan-Russia exchange years.