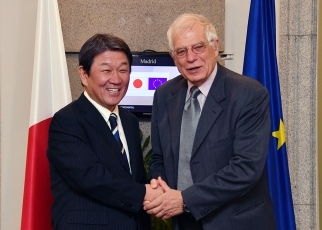 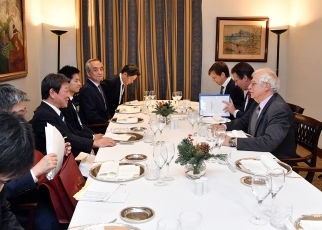 High Representative Borrell welcomed and appreciated Minister Motegi’s visit to Spain and attendance at the ASEM Foreign Ministers’ Meeting. In response, Minister Motegi congratulated Mr. Borrell again on his appointment as EU High Representative for Foreign Affairs and Security Policy, and expressed gratitude for his attendance at the Ceremony of the Enthronement of His Majesty the Emperor in October and the G20 Foreign Ministers’ Meeting in November. Minister Motegi expressed his pleasure at attending the ASEM Foreign Ministers’ Meeting in Spain, as well as respect for the EU’s role as Chair of the Meeting. Minister Motegi noted that the EU is a partner sharing universal values, such as freedom, democracy, human rights, and the rule of law, and expressed his intention to continue to work closely with High Representative Borrell, taking into account the Japan-EU EPA (Economic Partnership Agreement) and SPA (Strategic Partnership Agreement). In response, High Representative Borrell mentioned that the EU, as a partner sharing fundamental values, intends to cooperate closely with Japan to strengthen their strategic relations under the Japan-EU EPA and SPA, which entered into force in February 2019.
Page Top

Minister Motegi stated that, in the lead-up to the Japan-EU Summit to be held in Japan next year, he seeks to explore tangible projects on which Japan and the EU can cooperate in areas such as connectivity and security, and that as a first step, discussions shall take place at the Joint Committee of the Japan-EU SPA scheduled in January 2020. In addition, Minister Motegi expressed his hope that Japan and the EU, as pioneers of the era, will work closely to set a model for the world on global issues, such as digital, environment, and climate change. Minister Motegi commended the EU’s easing of import restrictions on Japanese food products, and expressed his expectation for the EU’s cooperation toward the lifting of restrictions founded on scientific evidence. In response, High Representative Borrell stated that the Japan-EU SPA Joint Committee shall hold discussions for implementing tangible cooperation, especially in the areas of connectivity and, defense and security, under the Japan-EU SPA. Minister Motegi stated that, with regard to the United Kingdom’s withdrawal from the EU, Japan is closely following the post-UK general election process. Minister Motegi expressed his expectations that the withdrawal will take place upon negotiations during the transition period on future UK-EU relations and in a manner that does not cause disruption, to which High Representative Borrell expressed his opinions.
Page Top

They exchanged views regarding North Korea, including the recent situation, and shared the view that they will continue to cooperate closely toward the complete denuclearization of North Korea, including full implementation of United Nations Security Council resolutions. In addition, Minister Motegi requested understanding and cooperation for the early resolution of the abductions issue and obtained the EU’s support. They also exchanged views regarding the situations in the Middle East and Asia.
Page Top

They exchanged views regarding a variety of agenda items and shared the view that they will coordinate closely toward a successful ASEM Foreign Ministers’ Meeting, which will commence on the evening of December 15.
Page Top