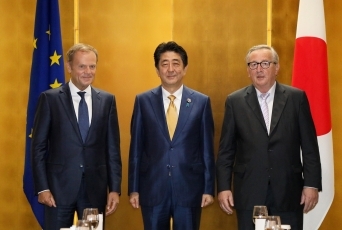 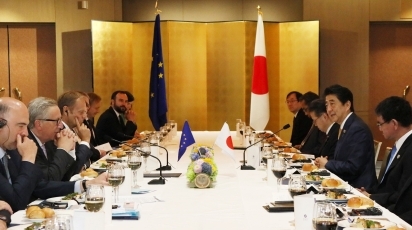 1. Cooperation toward the G20 Osaka Summit

The leaders shared the view that both Japan and the EU should closely cooperate toward the success of the G20 Osaka Summit, which begins the following day.

(1) Prime Minister Abe stated that Japan-EU relations have developed significantly under the leadership of President Tusk and President Juncker over the last five years, including the signing of the Japan-EU Economic Partnership Agreement (EPA) and the Japan-EU Strategic Partnership Agreement (SPA). Prime Minister Abe expressed his appreciation for the achievements of the two EU leaders, and thanked President Tusk for his visit to Hiroshima and Nagasaki prior to this meeting, and by which he showed consideration towards the wish of the Japanese people for a world without nuclear weapons.

(2) In response to this, President Tusk stated that this G20 Summit would be a difficult meeting, but while feeling responsibility of ours for our common future throughout his visit to Hiroshima and Nagasaki, it is fortunate that Prime Minister Abe is the Chair of the Osaka Summit under current situation and thus he would fully support Prime Minister Abe. President Juncker said that Japan-EU relations are the best of all time and a lot of achievements has been made over the last five years.

(3) The leaders confirmed that Japan-EU relations have entered a new stage owing to the entry into force of the EPA, and acknowledged the importance of continuously promoting trade and investment between Japan and the EU based on the Agreement.

(4) Regarding the SPA, the leaders confirmed that they will promote Japan-EU cooperation under the Agreement, focusing on areas including sustainable connectivity, quality infrastructure and global issues.

(1) President Juncker indicated that the Commission, on the basis of an in-depth analysis of the data provided by the Japanese authorities, is in a position to recommend further alleviation on the import measures on Japanese food products, and he expects that good results would be achieved within a few months.

(2) In response, Prime Minister Abe stated that the recovery of the disaster-affected area is the first priority of the Japanese government, welcomed the actions taken by the EU for further alleviation on the import measures on Japanese food products, and requested for the EU’s cooperation towards the achievement of lifting of the EU’s import restrictions at an early time.

The leaders also held frank exchange of views on situation regarding Brexit, as well as regional situations including North Korea, Iran and China, among others. In particular, with regard to North Korea, Prime Minister Abe reiterated his request for understanding and cooperation toward the early resolution of the abductions issue which is a top priority issue, and gained support from President Tusk and President Juncker. The leaders also shared the view on the importance of the full implementation of the United Nations Security Council resolutions.