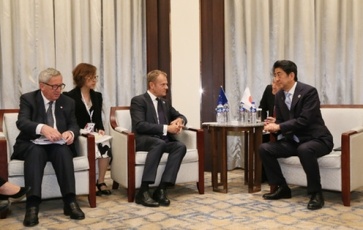 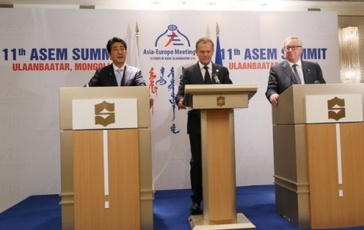 On Friday, July 15, commencing at 3:35 p.m. (local time) for approximately 25 minutes, Mr. Shinzo Abe, Prime Minister, held a meeting with H.E. Mr. Donald Tusk, President of the European Council, and H.E. Mr. Jean-Claude Juncker, President of the European Commission during his visit to Ulaanbaatar, Mongolia to attend the 11th Asia-Europe Meeting (ASEM 11) Summit Meeting,. The overview of the meeting is as follows.

Prime Minister Abe resolutely condemned the recent heinous terrorist attack in Nice: He expressed the pleasure of meeting the EU leaders again following the G7 Ise-Shima Summit, and expressed his hope that Japan and the European Union (EU) will drive the global economy based on the agreement reached at the G7 Summit to implement all available policies.

2. The United Kingdom’s decision to leave the EU

Prime Minister Abe explained that Japan will continue to make the utmost effort to reach agreement in principle as soon as possible during this year on the Japan-EU Economic Partnership Agreement (EPA), and the EU side replied that this is an important year for the EPA and the EU is determined to conclude it by the end of the year.

Prime Minister Abe mentioned North Korea’s human rights situation, includingthe abductions issue, and the situation in the South China Sea, particularly with regard to the final award that was issued recently in the arbitration between the Philippines and China, explained that it will be necessary for the countries concerned to comply with the award and he intends to coordinate with the EU to encourage the rule of law and the peaceful resolution of the dispute. The EU side explained that the EU’s statement on the arbitration between the Philippines and China is currently in the last stage of finalization, and the EU hopes to pursue further cooperation with Japan as a dependable partner that faces up to the global issues.