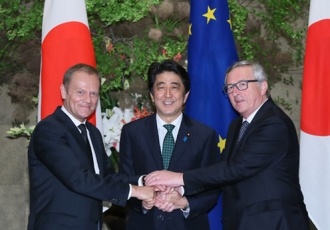 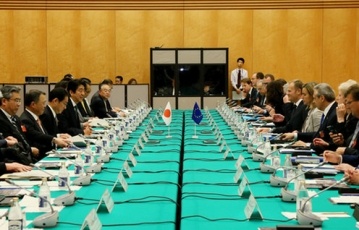 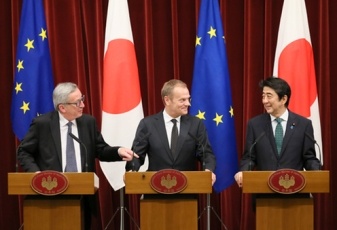 Prime Minister Abe welcomed both leaders to Japan, and expressed his intention to confirm the important role that Japan and the EU, which share fundamental values, play in achieving peace, stability and prosperity in the international community, and promote further progress in the negotiations on both the Japan-EU Economic Partnership Agreement (EPA) and the Japan EU Strategic Partnership Agreement (SPA) on the occasion of this Japan-EU Summit Meeting, the first to be held with the two leaders,. In response, President Tusk explained that Japan is one of the EU’s closest friends, and it is only natural that the EU chose Japan as the partner for his first summit meeting outside the European region. In addition, President Juncker stated that this is the second time he has met Prime Minister Abe since the G20 in Brisbane in November last year, and is his fifth visit to Japan, and he hopes to deepen discussions on the ambitious free trade agreement (FTA) with Japan.

Prime Minister Abe explained the “Legislation for Peace and Security” that was recently submitted to the Diet, and the EU leaders expressed their support and approval for Japan’s efforts based on the policy of “Proactive Contribution to Peace.” Furthermore, the Japanese and EU leaders welcomed concrete progress regarding cooperation between Japan and the EU on missions to improve security in the Republic of Niger and the Republic of Mali, as well as the joint exercises and cooperation with trials that Japan and the EU are undertaking in connection with anti-piracy activities off the coast of the Federal Republic of Somalia, and they decided to promote further cooperation.

Both leaders shared the view that they attach importance to both speed and quality in the Japan-EU EPA, and will further accelerate the negotiations, aiming to reach agreement in principle during this year.
In addition, Prime Minister Abe explained Japan’s economic situation, including the current state of Abenomics.
Furthermore, Prime Minister Abe requested that the EU’s import restrictions on food from Japan be eased and lifted on a scientific basis, and expressed his intention to cooperate with the EU in fields such as energy.

(3) Cooperation in other fields

The Japanese and EU leaders shared the view that they will deepen cooperation in the fields of global commons, including the sea, outer space and cyberspace and humanitarian assistance. Additionally, the Japanese and EU leaders confirmed they will advance further cooperation in the science and technology fields, endorsed the Joint Vision towards a new strategic partnership, and welcomed the signing of a joint declaration on future generation of communications networks and a cooperation arrangement on researcher exchanges between Japan and the EU.
Furthermore, Prime Minister Abe announced the new Japan-Europe MIRAI programme for promoting next-generation exchanges by inviting 150 university students and others from Europe during the current fiscal year. The EU leaders welcomed the programme.

The Japanese and EU leaders shared the view that Japan and the EU will cooperate and collaborate in responding to the climate change issues towards the success of the 21st Conference of the Parties (COP21), international counterterrorism, including border security, and the post-2015 development agenda and other issues. Additionally, Prime Minister Abe explained the importance of promoting “Quality Infrastructure Investment” in order to deal effectively with the world’s vast infrastructure demand.

(1) Concerning the situation in Ukraine, Prime Minister Abe expressed his respect for the EU’s initiatives for peace in Ukraine, and stated that Japan also attaches importance to the solidarity of the G7 and is making an effort to improve the situation. Prime Minister Abe also explained that for Ukraine to become a nation that is resilient and sustainable, bold and comprehensive reform will be essential, and Japan will steadily implement support to encourage Ukraine’s reform efforts. In response, the EU leaders expressed their support for Ukraine’s sovereignty and territorial integrity, noted the importance of implementing the Minsk agreements, and conveyed their gratitude for Japan’s support and assistance.

(2) Concerning the situation in East Asia, Prime Minister Abe explained recent developments such as the Japan-China Summit Meeting in April, and Japan’s basic position. In response, the EU leaders provided a comprehensive explanation of the EU’s relationship with China. The Japanese and EU leaders also confirmed ongoing cooperation in connection with North Korea.

(3) Concerning the Iran situation, Prime Minister Abe and Minister Kishida welcomed the recent Lausanne Accord, and expressed expectation that a final agreement will be reached. The Japanese and EU leaders shared the view that they will continue to work closely together on forming a final agreement. Additionally, the Japanese and EU leaders also exchanged views on the Islamic State of Iraq and the Levant (ISIL), peace in the Middle East, and Africa.