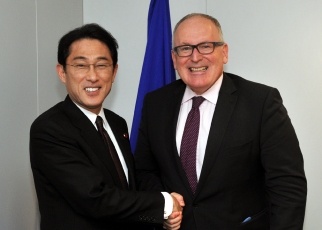 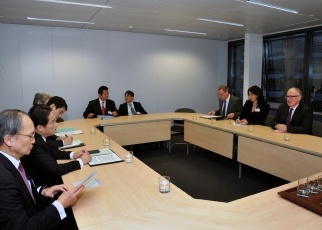 Minister Kishida congratulated Mr. Timmermans on his appointment as the First Vice-President, and also stated that he was pleased to meet him again since the NPDI Ministerial Meeting held in April last year. Moreover, Minister Kishida stated that Japan had pledged never to wage a war again based on the reflection of the past World War, had made a great contribution to the peace, stability and prosperity of the international society as a peace-loving nation over the 70 years since the end of the war, and Japan’s orientation as a peace loving country would never sway. Minister Kishida also stated that the European Union (EU) is a credible and important partner with whom Japan can act together and that Japan would closely cooperate to further strengthen Japan-EU relationship under the new administration.

In response to the above, First Vice-President Timmermans congratulated Minister Kishida on his reappointment as the Minister for Foreign Affairs and stated that his visit to Hiroshima for the NPDI Ministerial Meeting was one of his most important memories of his days as the foreign minister of the Netherlands. Also, he stated he had carefully read Prime Minister Abe’s message, which was delivered at the beginning of this year, which marks the 70th year of end of the World War II. He continued by affirming that Japan and the EU share fundamental values such as freedom, democracy, rule of law, and human rights and that such fundamental values should be protected together.

A. Minister Kishida and First Vice-President Timmermans confirmed that based on the agreement between leaders in the 22nd Japan-EU Summit Meeting held last May, concrete follow-ups had been implemented in the fields of security, economy and global issues and at the same time shared the view that they would promptly arrange the date with a view of holding the Meeting in the first half of this year.

B. Regarding the Japan-EU Economic Partnership Agreement (EPA), Minister Kishida stated that, as agreed in the Japan-EU Summit Meeting held last November, he wished to accelerate negotiations together, aiming to reach agreement in principle during this year.  In response to this, First Vice-President Timmermans stated that the Japan-EU EPA is important not only from a trade perspective but also from a viewpoint of the strategic partnership and that he intended to make efforts from that angle.

C. Moreover, Minister Kishida stated that the Japan-EU Strategic Partnership Agreement (SPA), which will form a foundation for further strengthening the broad-ranging cooperation, is important to render the Japan-EU relationship more enduring and high level, and wish to work together with the EU for an early conclusion of the SPA.

D. In addition, Minister Kishida requested the EU to ease and lift restrictions on food imports from Japan, on a scientific basis, which have been maintained since the accident at the Fukushima Daiichi Nuclear Power Station.

In response to this, giving an explanation on the efforts by the EU, First Vice-President Timmermans stated that the EU would like to continue its cooperation with Japan.