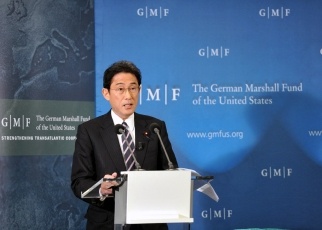 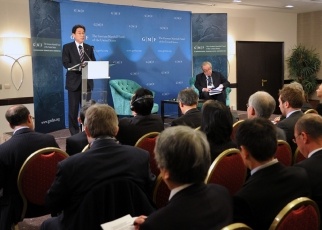 On January 20, commencing at 9:30 a.m. for one hour (local time), Mr. Fumio Kishida, Minister for Foreign Affairs, who was visiting Brussels, delivered a keynote address in the Japan Trilateral Forum, Brussels (closed to the public), an international symposium that was hosted by the German Marshall Fund (GMF) of the United States on January 19 and 20. The overview is as follows. Approximately 130 people attended the keynote address, including government officials from the EU, NATO and the U.S., renowned experts and media from the U.S. and Europe.

Minister Kishida gave a keynote address on the topic of "Year 2015 as the opening of a new chapter in Japan-Europe relations." The main points are as follows.

Main points of the address

2. Comments from EU and NATO, and a question-and-answer session with participants

Following this, there were comments from NATO and the EU on Minister Kishida's keynote address, and Minister Kishida held a question-and-answer session with participants.