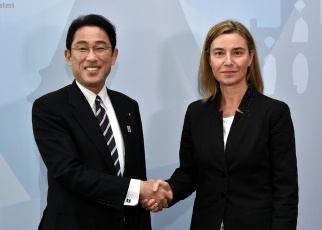 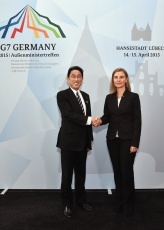 On April 14, commencing at 12.30 p.m. (local time) for approximately one hour, Mr. Fumio Kishida, Minister for Foreign Affairs, who is visiting Lubeck, Germany to attend the G7 Foreign Ministers’ Meeting, held a Japan-EU Foreign Ministers’ Meeting over lunch with Ms. Federica Mogherini, the High Representative of the European Union for Foreign Affairs and Security Policy, Vice-President of the European Commission. The overview of the meeting is as follows.
1. Opening remarks
Minister Kishida and High Representative Mogherini confirmed that the next Japan-EU Summit Meeting will be held in Tokyo on May 29 this year, and concurred on cooperate closely toward its success.

2. Japan-EU relations
(1) Minister Kishida stated that he wants the next Summit Meeting to be an opportunity to confirm the important role Japan and the EU will continue to perform going forward in achieving peace, stability and prosperity, and give a boost to the advancement of the Japan-EU EPA and SPA negotiations at the leader level. Additionally, Minister Kishida noted the importance of border security, including by utilizing passenger name record (PNR), from the perspective of advancing international counterterrorism, and said he wants discussions between the relevant departments of Japan and the EU to take place so that the provision of PNR from European airline companies is achieved. Furthermore, Minister Kishida called for easing and lifting the EU's restrictions on imports of food from Japan, including those from Fukushima Prefecture, on a scientific basis.
(2) In response, High Representative Mogherini said it will be important to create definite momentum at the leader level regarding both of the Japan-EU EPA and SPA negotiations, and that cooperation on global challenges such as climate change, the post-2015 development agenda and counterterrorism is beneficial to Japan and the EU. In this context, Representative Mogherini said she appreciates Minister Kishida’s personal commitment to nuclear disarmament and non-proliferation, wants to cooperate on discussions between Japan and the EU on PNR because it will potentially have mutual benefits for both sides, and hopes that positive progress will be made with reviewing restrictions on imports of food from Japan, including those from Fukushima Prefecture.

3. Regional and international affairs
(1) Ukraine
i) High Representative Mogherini stated that the complete fulfilment of the Minsk Agreement is important. She said a foreign ministers’ meeting was held in a “Normandy format” in Berlin on the previous day, and she is also working closely with the Organization for Security and Co-operation in Europe (OSCE). High Representative Mogherini said it is also important to simultaneously encourage Ukraine’s reform efforts, and she appreciates cooperation with Japan in responding to the Ukraine situation and Japan’s support for Ukraine.
ii) Minister Kishida expressed his respect for the EU’s initiatives for stabilizing Ukraine, along with stating that localized shelling and fighting continues in eastern Ukraine even after the ceasefire agreement and the situation remains unstable. He said supporting and encouraging Ukraine’s reform efforts is also important, and explained Japan’s initiatives.

(2) Iran
i) High Representative Mogherini explained the negotiations with Iran and future challenges, and said she appreciates that Japan is utilizing its bilateral relationship to work on Iran. She said the recent agreement is also important from the perspective of the security field. High Representative Mogherini said it is also important from the standpoint of Iran fulfilling a more constructive role in the Middle East and contributing to regional stability.
ii) Minister Kishida expressed respect for the efforts of High Representative Mogherini and the EU in connection with the negotiations with Iran, and said he has strong expectations a final agreement will be attained. Minister Kishida explained that thus far also, Japan has been working on Iran based on its traditional relationship with the country, and will strengthen those efforts going forward. He said he wants to continue to cooperate closely with the EU also.

4. Lastly, Minister Kishida and High Representative Mogherini shared the view that they will use various future opportunities, including the next Japan-EU Summit Meeting, to exchange views closely.