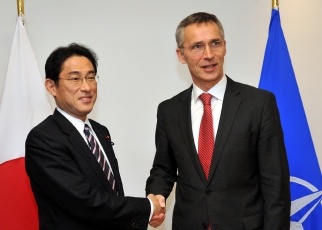 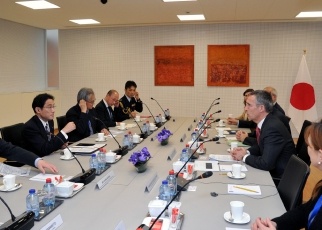 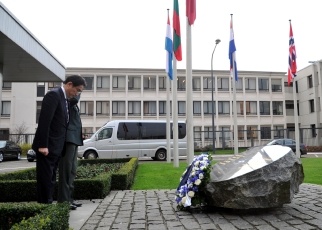 On January 20, from 4:00 p.m. to 4:40 p.m. (local time), Mr. Fumio Kishida, Minister for Foreign Affairs of Japan, during his visit to Brussels, held a meeting with Mr. Jens Stoltenberg, Secretary General of the North Atlantic Treaty Organization (NATO). This is the first meeting between Mr. Stoltenberg and a Japanese Government dignitary since Mr. Stoltenberg assumed his post of Secretary General of NATO on October 1, 2014. An overview of the meeting is as follows:

Secretary General Stoltenberg congratulated Minister Kishida on his reappointment and expressed his intention to further strengthen Japan-NATO relations based on comprehensive documents, such as the “Joint Political Declaration between Japan and the North Atlantic Treaty Organization” signed in 2013 and the “Individual Partnership and Cooperation Programme between Japan and NATO” (IPCP) signed in 2014. Moreover, Secretary General Stoltenberg stated that Japan’s “Proactive Contribution to Peace” enables the promotion of practical cooperation for the improvement of interoperability and expressed his expectation to carry out practical cooperation, such as anti-piracy activities, which are vital for the trade of Japan and NATO member countries, and enhancement of cooperation in the field of women including dispatching female Self-Defense Forces personnel to NATO Headquarters.
In response to the above, Minister Kishida, congratulating Mr. Stoltenberg on his appointment as the secretary general, stated that Japan had pledged never to fight a war again based on the reflection of the past World War, and have made great contributions to the peace, stability and prosperity of international society as a peace-loving nation in the past 70 years since the end of the WWII. He also stated that Japan’s orientation as a peace-loving nation would never sway. He mentioned that NATO was a “reliable natural partner” for Japan that shares fundamental values and that Japan would more proactively act for the peace and prosperity of the world together with NATO.

Secretary General Stoltenberg expressed his concerns about the safety of the abducted Japanesecitizens, condemned international terrorism by ISIL, and stated that he would provide support so that Japan can find a solution of this abduction case.
Minister Kishida stated that such an act of blackmailing through holding people’s lives as hostage is utterly impermissible, and he feel strong indignation. Minister Kishida stated that Japan will not give in to terrorism and will contribute to the counter-terrorism efforts of the international community, and requested assistance such as information collection on facts about the case and cooperation for an early release of the abducted Japanese nationals.
In response to this comment, Secretary General Stoltenberg gave an explanation on NATO’s measures against international terrorism from Afghanistan to the Horn of Africa. Then, Secretary General Stoltenberg appreciated Japan’s measures against international terrorism, including assistance for such efforts by NATO and expressed his intention to gather information on this case in collaboration with member countries of NATO and to provide as much cooperation as possible.

Minister Kishida gave an explanation on a Cabinet decision made last year on the basic policy on the legal basis for security and at the same time stated that he would like to maintain high-level dialogues, collaborate to deal with international situations, and build practical cooperation on the basis of IPCP to further strengthen Japan-NATO relations. In particular, Minister Kishida welcomed the joint exercises between the Self-Defense Forces and the units of NATO in the Gulf of Aden concerning anti-piracy activities and dispatching of female Self-Defense Forces personnel to NATO Headquarters and expressed his intention to deepen cooperation through participation in seminars and training in the fields listed in IPCP. Moreover, Minister Kishida added that for the stability of Afghanistan following the withdrawal of ISAF, Japan would continue its coordination with the international society, including NATO, and make contributions.
In response to the above, Secretary General Stoltenberg welcomed the progress of such high-level dialogues and practical cooperation, appreciated contributions by Japan in its response to Afghanistan, and stated that cooperation and assistance from Japan would be important in the future as well.

Minister Kishida and Secretary General Stoltenberg exchanged opinions on the situation in Asia and in Ukraine. As far as the situation in Ukraine is concerned, in particular, Minister Kishida appreciated NATO’s efforts and stated that emphasizing the unity of G7,Japan would proactively work to turn around the situation in Ukraine, including the new assistance that had been announced on the day.
In response to this comment, Secretary General Stoltenberg appreciated Japan’s solidarity with G7 and assistance toUkraine and expressed his gratitude.

Prior to the meeting, Minister Kishida paid a floral tribute and offered a silent prayer for the officials of NATO who were victimized amid their efforts for the peace and stability of the world, including Afghanistan, with the attendance of General Knud Bartels, Chairman of the Military Committee of NATO.