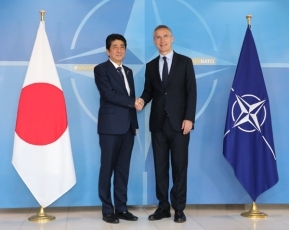 On July 6, commencing at 9:45 a.m. local time (4:45 p.m. on the same day, Japan time) for approximately 40 minutes, Mr. Shinzo Abe, Prime Minister of Japan held a meeting with Mr. Jens Stoltenberg, Secretary General of the North Atlantic Treaty Organization (NATO), at the NATO headquarters. The overview of the meeting is as follows.

Secretary General Stoltenberg welcomed Prime Minister Abe’s visit to the NATO headquarters, referred to the advances in cooperation between Japan and NATO thus far, and explained that he hopes to continue strengthening the relationship. In response, Prime Minister Abe explained his hope to consolidate the network of allies among Japan, the United States and Europe, which share fundamental values, and promote Japan-NATO cooperation as a reliable partner.

(1) Prime Minister Abe and Secretary General Stoltenberg confirmed that cooperation is moving forward in fields such as maritime security, cyberspace, humanitarian assistance and disaster relief, and women, peace and security, based on the Individual Partnership and Cooperation Programme (IPCP) agreed on three years ago, and shared the view that they will promote further cooperation.

(2) Specifically, Prime Minister Abe explained that in order to further strengthen Japan-NATO cooperation in the field of maritime security, Japan agrees to dispatch a liaison officer to the Allied Maritime Command (MARCOM) in the United Kingdom as proposed by the NATO side, and that Japan is also giving serious consideration to opening a Mission of Japan to NATO, which is again in response to a request from the NATO side. Secretary General Stoltenberg welcomed Prime Minister Abe’s comments, and expressed the view that strengthening collaboration on information exchange and joint drills with a highly knowledgeable and technically advanced partner such as Japan will be beneficial not only to Japan-NATO relations but to the NATO alliance partners as well. In addition, with regard to the cyberspace field, Prime Minister Abe and Secretary General Stoltenberg exchanged views on approaches to strengthening cooperation through the NATO Cooperative Cyber Defence Centre of Excellence (CCDCOE) in Estonia.

(3) Furthermore, Prime Minister Abe welcomed Secretary General Stoltenberg’s intention to visit Japan, and stated that he is looking forward to meeting him again.

The two sides exchanged views on regional and international affairs, including the Asia-Pacific region, such as the North Korean nuclear and missile issues, and shared recognition that the security environments of Asia and Europe are closely linked, and that in order to maintain the international order based on the rule of law, it will be important to enhance cooperation between Japan and NATO, which share fundamental values, and to strengthen the network of allies.