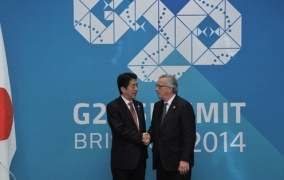 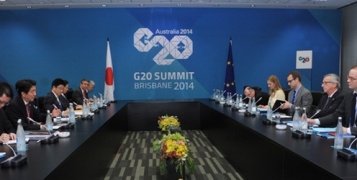 (Photo: Cabinet Public Relations Office)
On November 16, commencing at 3.50 p.m. (local time) for approximately 40 minutes, Prime Minister Shinzo Abe, who was on his visit to Brisbane, Australia, to attend the G20 Summit, held a Summit Meeting with H.E. Jean-Claude Juncker, President of the European Commission, in a conference room of the G20 Summit. The overview of the meeting is as follows. (Attendees on the Japan side included Mr. Taro Aso, Deputy Prime Minister and Minister of Finance, and Mr. Katsunobu Kato, Deputy Chief Cabinet Secretary, and on the EU side included Mr. Martin Selmayr, Head of Cabinet of the President of the European Commission). This was the first meeting between Prime Minister Abe and President Juncker since the latter’s appointment on the first of this month.