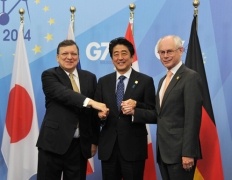 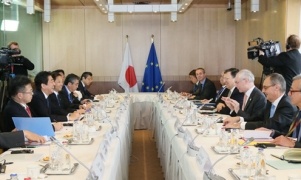 (Photo: Cabinet Public Relations Office)
On Wednesday, June 4, commencing at 10:00 a.m. (local time) for approximately 35 minutes,. Prime Minister Shinzo Abe, who was on his visit to Brussels, the Kingdom of Belgium to attend the G7 Summit, held a Summit Meeting with H.E. Mr. Herman Van Rompuy, President of the European Council, and H.E. Mr. José Manuel Barroso, President of the European Commission. An overview of the meeting is as follows:

President Van Rompuy welcomed Prime Minister Abe by quoting the haiku poem originally read by Sodo Yamaguchi, an Edo-era haiku poet: “Me ni aoba, yama hototogisu, hatsugatsuo(Full of greens flood your sight, Little cuckoos up in the height, Fresh bonito as a seasonal delight).” He said that Prime Minister Abe made the visit to Brussels in good season, and that it was a good occasion for Japan and the EU to have bilateral meetings and hold discussions with the other G7 leaders. President Van Rompuy added that the follow-up of the last Japan-EU Summit Meeting had been steadily undertaken between Japan and the EU, and stated that negotiations for the Japan-EU Strategic Partnership Agreement (SPA) and the Economic Partnership Agreement (EPA) had been progressing. President Barroso welcomed Prime Minister Abe, and stated that cooperation had deepened between Japan and the EU in a wide range of fields. In response, Prime Minister Abe expressed his gratitude for the pleasant time he had in the dinner meeting hosted by Mr. and Mrs. Van Rompuy at Chateau of Val-Duchesse in his previous visit to Brussels, and stated that he would like to have a frank exchange of views on the situation of Ukraine and other relevant issues before the G7 Summit.

(1) Prime Minister Abe welcomed that concrete follow-ups have been carried out on the issues on which the leaders shared their views in the previous Japan-EU Summit Meeting, such as progress in preparation for implementing joint exercises between Japan and the EU for anti-piracy activities off the coast of Somalia by the end of the year. Prime Minister Abe also stated that he would like to further advance negotiations for the Strategic Partnership Agreement (SPA). In addition, while appreciating the fact that the leaders shared their views at the previous summit meeting on the importance of an early conclusion to the Japan-EU EPA, Prime Minister Abe stated that he would like to further accelerate negotiations for an early conclusion of a comprehensive and high-level EPA.

(2) In response to the above, President Van Rompuy especially appreciated Japan’s efforts in further cooperating with anti-piracy activities in Africa. President Barroso stated that regarding the “review” process of the EPA, discussions were ongoing among member states on the basis of the European Commission’s report. President Barroso added that although he cannot prejudge the results of the discussion at this stage, it is important to advance the discussion and further accelerate negotiations.

(1) Concerning the situation in Ukraine, the leaders shared their views on welcoming the relatively peaceful conduct of the Ukrainian presidential election.

(2) Moreover, the leaders shared their views that it is important to ensure the political and economic stability of Ukraine, and that the international community should support the efforts by the Government of Ukraine to that end. In terms of support, Prime Minister Abe stated that the Government of Japan had already expressed its intention to provide USD 1.5 billion. In addition, Prime Minister Abe stated that he would dispatch an economic mission to Ukraine in the near future to discuss cooperation for supporting the new administration, including enhancing the economic relationship with Japan; and he added that he would take the issue of supporting the internally displaced people into consideration. In response to this, President Van Rompuy expressed his gratitude, stating that although Japan is not a neighboring country to Ukraine, Japan implemented sanctions to show its unity with the EU, in addition to providing USD 1.5 billion of support through the framework of the International Monetary Fund (IMF).

(3) Concerning the relationship with Russia, the leaders shared their views that any attempts to change the status quo by force or coercion cannot be accepted; actions by Russia such as annexation of the Autonomous Republic of Crimea and destabilization of eastern Ukraine cannot be permitted; and having Russia involved in the issues of the international community as a responsible country is neccesary.

(4) Prime Minister Abe stated that the situation in Ukraine is not “the fire on the other side of the river,” but influences global situations, including those in Asia; and therefore, the Government of Japan would proactively engage itself in and contribute to not only the support of Ukraine, but also on discussions for future framework. In response, President Van Rompuy stated that the election of President Poroshenko meant the birth of a legitimate president in the country, and he regarded this as a positive move. However, President Van Rompuy added that Russia has continued its intervention in eastern Ukraine and instability still remains; and for that reason, the EU called on that Russia to immediately stop its intervention, which is destabilizing eastern Ukraine.

(5) President Van Rompuy stated that, as decided at the European Council meeting (EU summit meeting) held one week ago, it will be necessary to prepare other measures in case the situation further worsens. In response to this, Prime Minister Abe stated that the Government of Japan would work closely with the EU and G7, and would discuss additional sanctions in case the situation further worsens.

Regarding the situation in Asia, the leaders exchanged views on the direction of discussions at the G7 Summit. Concerning the situation in the South China Sea, Prime Minister Abe stated his concerns over the heightening tension in an area of ocean with undefined borders in the South China Sea. He suggested three principles (1. assertion based on law; 2. opposition against intimidation by “force;” and 3. peaceful settlement of disputes), which gained support from many countries at the Asian Security Summit, and he would like to continue coordination with the EU concerning the situation in this area. In response to this, President Van Rompuy stated that he shared the concerns Prime Minister Abe had expressed, and was responded with concerns over further heightening tensions in Asia where violent incidents already took place in Asia.