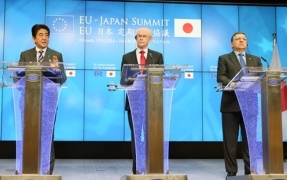 On Wednesday, May 7, commencing at 10:30 a.m. for approximately three and a half hours, including a joint press conference, the 22nd Japan-EU Summit Meeting was held in Brussels. The overview of the meeting is as follows. As an outcome of the meeting, the leaders issued a joint press statement(PDF)

Following welcoming addresses, H.E. Mr. Herman Van Rompuy, President of the European Council, and H.E. Mr. José Manuel Barroso, President of the European Commission stated that it is meaningful to hold this Summit Meeting at a time when Europe is beginning to achieve economic growth again. In response, Prime Minister Shinzo Abe said amid the growing sense of uncertainty worldwide, including the situation in Ukraine, there is a need for Japan and the EU, which share fundamental values and have a historically deep relationship, to work closely together and develop that relationship in order to respond more effectively to the various challenges facing the international community today.

Both leaders shared the view that they will promote concrete cooperation in three fields: (1) economy; (2) security; and (3) promotion of global interests, including achieving “a society in which women shine.”

(1) Economic field
Both leaders welcomed the steady progress in the Japan-EU Economic Partnership Agreement (EPA) negotiations, and concurred on the importance of the early conclusion of a comprehensive and high-level EPA. Furthermore, Prime Minister Abe explained the current situation with regard to Abenomics, in particular the initiatives aimed at achieving Japan’s economic revitalization and fiscal consolidation side by side. The EU leaders stated that the European economy is recovering but has not yet improved enough, and there is a need for fiscal and structural reforms. They also made a positive assessment of Japan’s economic and fiscal policies.

(2) Expanding cooperation in the security field
Prime Minister Abe stated that the policy of “Proactive Contribution to Peace” based on the principle of international cooperation and the EU’s engagement with security challenges based on the “comprehensive approach” have a high degree of affinity, and the EU side welcomed and supported Japan’s initiatives based on a “Proactive Contribution to Peace.” Furthermore, they affirmed that in addition to anti-piracy activities off the coast of Somalia, collaboration between the EU’s Common Security and Defence Policy (CSDP) missions in Republic of Mali, Democratic Republic of the Congo and Republic of Niger and Japan’s assistance will be strengthened.

(3) Advancing global interests including realization of “a society in which women shine”
Prime Minister Abe explained that an important international event on women’s empowerment is scheduled to be held in Japan in September this year, and requested the cooperation of the EU. In response, the EU leaders stated that high-level participation from the EU is assured. Both leaders decided to hold the First EU-Japan Space Policy Dialogue in Tokyo in the latter half of this year and to launch an EU-Japan Cyber Dialogue. Additionally, in the area of science and technology, both leaders expressed expectation that research cooperation would take place mutually beneficial and high-quality.Additionally, in the area of people-to-people exchanges they also decided to mutually support respective events to promote student exchanges.
Both leaders stated that the Japan-EU Strategic Partnership Agreement (SPA) currently under negotiation will form a foundation for further strengthening this broad-ranging cooperative relationship between Japan and the EU, and that the same can be said for the EPA, and they reaffirmed the importance of early conclusion of the agreements.

(1) Ukraine
Prime Minister Abe stated that in the Ukrainian presidential election scheduled for May 25, successful polling in a peaceful and democratic manner is important, and the door remains open to a diplomatic resolution. In response, the EU leaders said two points are particularly important with regard to this issue, dialogue with Russia and stabilizing Ukraine, and they praised Japan’s contribution thus far.

(2) Asia
The leaders also exchanged views on the situation in East Asia. In particular with regard to North Korea, they reaffirmed their commitment to continue to work closely in the field of human rights, including the abduction issue.

(3) The Middle East and Africa
In addition, both leaders exchanged views on the situations in Iran, Syria and Africa. In particular, where Africa is concerned, both leaders shared their intention to strengthen cooperation based on the standpoint that Japan and Europe have an identical approach that emphasizes “partnership” with Africa and human resources.

(4) Global agendas
In addition, both leaders exchanged views broadly regarding global challenges such as the Post-2015 Development Agenda, climate change, the global economy and energy issues.

At the beginning of the meeting President Van Rompuy recited his haiku:
“Once comes May, spring
ushers in life everywhere;
Laughing blossoms”
In response, at the beginning of the joint press conference Prime Minister Abe recited a haiku
“At an old castle
Savoring hospitalities
In a balmy spring evening”
a reference to an unofficial dinner hosted by Van Rompuy and his wife at Chateau of Val-Duchesse on the previous day.