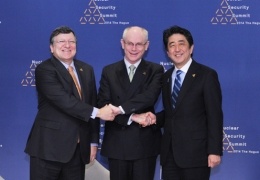 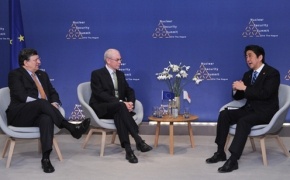 On Tuesday, March 25, commencing at 9:00 a.m. (local time) for approximately 25 minutes, Prime Minister Shinzo Abe, who is participating in the Nuclear Security Summit in Hague, the Netherlands, held a Summit Meeting with H.E. Mr. Herman Van Rompuy, President of the European Council, and H.E. Mr. José Manuel Durão Barroso, President of the European Commission. The overview of the meeting is as follows.

Prime Minister Abe said that he wants to continue to promote the relationship between Japan and the EU in a comprehensive manner based on the three pillars of enhancing economic relations, expanding security cooperation and achieving global interests particularly realization of a society in which women shine, which were discussed at the Japan-EU Summit Meeting held in November last year.
In response, the EU side said that they agree on the agenda of three pillars of cooperation mentioned by Prime Minister Abe, and that they want the next Japan-EU Summit Meeting to add momentum to the development of Japan-EU relations. They said that along with the early conclusion of the Japan-EU Economic Partnership Agreement (EPA), a Strategic Partnership Agreement (SPA) will also be an important framework for strengthening the partnership between Japan and the EU.
In addition, Prime Minister Abe pointed out that the EU is an important partner in the concrete implementation of the policy of “Proactive Contribution to the Peace”. The EU side responded that they want to give concrete consideration to collaboration with Japan on the Common Security and Defence Policy (CSDP) in the future.

Prime Minister Abe said that changing the status quo by force is completely unacceptable and that Japan wants to continue to cooperate with G-7, along with mentioning the importance of issuing a unified message to Russia. He noted that this year’s G-7 will be held in Brussels and expressed Japan’s intention to continue to cooperate closely with the EU.
In response, the EU side expressed gratitude for comments Prime Minister Abe made at the time of the recent G-7 Summit Meeting, in which he noted the importance of the G-7’s cooperation, expressed support for Ukraine and emphasized territorial integrity. The EU side also said that prevention of the situation from further deterioration, realization of stability and compliance with the law are priority issues, and that it is important that diplomatic channels with Russia remain open.

Prime Minister Abe said that he would hold a Summit Meeting with the Republic of Korea on the same day in a trilateral format of Japan, the U.S. and ROK. He said that Japan’s door is always open for dialogue with China and that he wants to continue to strive diligently to try to achieve mutual understanding with China and ROK for improving relations.