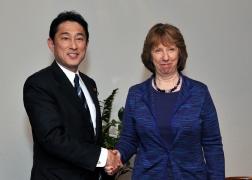 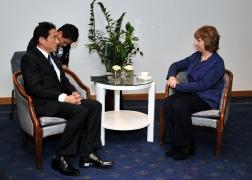 On Wednesday, January 22, from 12:00 p.m. local time for around 20 minutes, Mr. Fumio Kishida, Minister for Foreign Affairs of Japan, who is visiting Switzerland to attend the Geneva II, held a meeting with Ms. Catherine Ashton, the High Representative of the Union for Foreign and Security Policy, Vice-President of the European Commission. An overview of the meeting is as follows.

Foreign Minister Kishida said that Japan and the EU closely collaborated on various issues including Iran’s nuclear program last year, and Japan continues to work closely with the EU to tackle international challenges. He also expressed his will to work on steady implementation of what both sides agreed at the last Japan-EU Summit, including cooperation for early conclusion of a Strategic Partnership Agreement (SPA) and an Economic Partnership Agreement (EPA). In response, High Representative Ashton said that the EU would like to continue close cooperation on various agendas with Japan.

(1)Syria
Foreign Minister Kishida said that cessation of violence, promotion of political dialogue and improvement in appalling humanitarian situations are imminent challenges. He explained that Japan had pledged a total of $400 million humanitarian assistance for Syria, including additional $120 million, and further said that Japan would like to contribute to the humanitarian assistance and the political dialogue with firm determination and sense of responsibility. High Representative Ashton expressed her gratitude and respect to Japan for significant assistance to people of Syria and neighboring countries and welcomed Japan’s efforts with strong commitment on this matter.