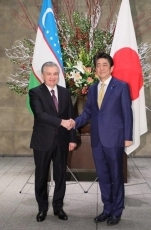 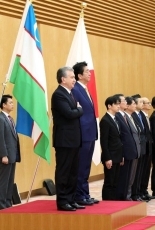 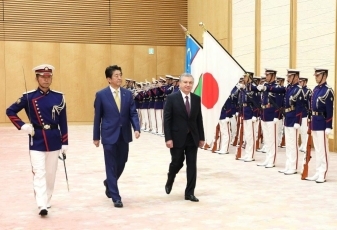 On December 19, commencing at around 6:20 p.m. for approximately 50 minutes, Mr. ABE Shinzo, Prime Minister of Japan, held a Summit meeting with H.E. Mr. Shavkat Mirziyoyev, President of the Republic of Uzbekistan, who was paying an official visit to Japan. The meeting was attended by Mr. NISHIMURA Yasutoshi, Minister in charge of Economic Revitalization, Mr. OKADA Naoki, Deputy Chief Cabinet Secretary, and others from the Japanese side and by H.E. Mr. Ravshan Gulyamov, Advisor to the President, H.E. Mr. Abdulaziz Kamilov, Minister of Foreign Affairs , H.E. Mr. Sardor Umurzakov, Minister of Investments and Foreign Trade , H.E. Mr. Ibrokhim Abdurakhmonov, Minister of Innovative Development , H.E. Mr. Nozim Khusanov, Minister of Employment and Labor Relations, and others from the Uzbek side. The overview of the meeting is as follows.

The Summit meeting was followed by a document signing and exchange ceremony. The two leaders signed the “Joint Statement on Further Deepening and Expanding Strategic Partnership between Japan and Uzbekistan .” In addition, both sides exchanged signed documents of the Japan-Uzbekistan Tax Convention , the Japan-Uzbekistan Customs Mutual Assistance Agreement (PDF)

Afterwards, a banquet hosted by Prime Minister and Mrs. Abe took place in a relaxed atmosphere, during which views were exchanged regarding a wide variety of matters, including economic and cultural exchanges.

(1) Prime Minister Abe welcomed President Mirziyoyev’s first visit to Japan, stating: “Japan attaches importance to its relations with Uzbekistan, which plays a critical role for the stability and prosperity of not only Central Asia but also the international community. I look forward to holding a fruitful meeting today for opening new horizons in the long history of friendship and strategic partnership between our two countries.”

Prime Minister Abe stated, “I welcome that cooperation between the two countries has made significant progress in a variety of areas, ever since I visited Uzbekistan in 2015 and you assumed the presidency in the following year,” noting, “I highly appreciate your reforms, and Japan intends to continue to cooperate for the development of your country.” President Mirziyoyev expressed his intention to enhance the quality of the strategic partner relations between the two countries and promote their cooperation on many fronts.

(1) Regarding economic cooperation, Prime Minister Abe conveyed Japan’s decision to provide yen loans totaling 1.5 billion U.S. dollars for constructing a third plant at the Navoi Thermal Power Station and maintaining existing power stations, as well as yen loans exceeding 200 million U.S. dollars for the agricultural industry.
Prime Minister Abe, noting the progress made by projects in which Japanese companies are participating and the signing of the Tax Convention and Customs Agreement, stated, “Japan expects that the business environment in Uzbekistan will further improve, making activities by Japanese companies smoother.”
In response, President Mirziyoyev expressed appreciation for Japan’s long-time assistance for the modernization of and human resource development in Uzbekistan, and expressed his determination to advance reforms for creating an attractive investment environment.

(2) Regarding exchanges in a variety of areas, Prime Minister Abe stated that people-to-people exchanges are the cornerstone of their bilateral relations, and expressed Japan’s intent to coordinate for expanding exchanges between Uzbekistan and Japan’s local areas, such as Nagoya, Maizuru, and Nara, as well as tourism, sports, host town, and academic exchanges.
Prime Minister Abe also expressed appreciation for the careful management of the graveyard for deceased Japanese detainees in Uzbekistan. The two leaders shared the view on holding working-level consultations concerning the detainees’ remains, taking into consideration the sentiments of the people of both countries.

(1) The two leaders welcomed the developing of bilateral cooperation in the international arena and confirmed their further cooperation. In this context, President Mirziyoyev expressed Uzbekistan’s steadfast support for Japan’s admission as a permanent member of the United Nations (UN) Security Council, and announced that Uzbekistan will support Japan in the election of non-permanent members in 2022 and the election of judges to the International Court of Justice (ICJ) in 2020.

(2) The two leaders also exchanged views regarding regional situations, including Central Asia and North Korea.
With regard to Central Asia, President Mirziyoyev stated that Uzbekistan attaches importance to advancing the “Central Asia plus Japan” Dialogue, and Prime Minister Abe stated, “I highly value your initiatives for improving relations with countries in the region and for regional cooperation”
Regarding North Korea, Prime Minister Abe called for close coordination between the two countries toward the complete denuclearization of North Korea. Furthermore, Prime Minister Abe sought President Mirziyoyev’s understanding and cooperation for the early resolution of the abductions issue and obtained the President’s support.