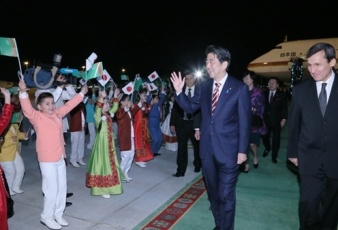 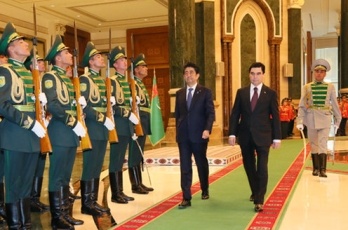 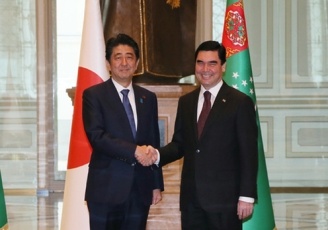 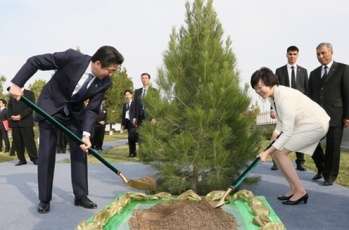 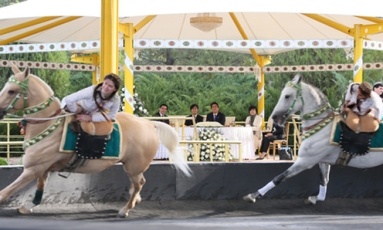 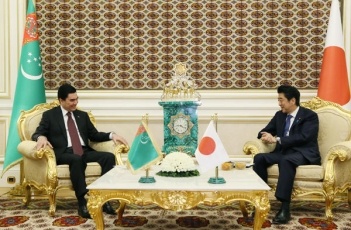 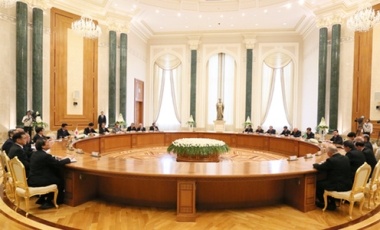 On October 23, commencing at 9:05 a.m. local time until 11:15 a.m., Prime Minister Shinzo Abe, who was on an official visit to Turkmenistan, held a summit meeting that ran for over two hours with H.E. Mr. Gurbanguly Berdimuhamedov, President of Turkmenistan.

This summit meeting was the third occasion for Prime Minister Abe to hold talks with President Berdimuhamedov. The initial talks lasted for approximately 80 minutes, comprising a meeting of a small group of relevant persons. It was followed by a larger meeting, which ran for approximately 45 minutes.

Prime Minister Abe indicated his intention to dispatch an ambassador extraordinary and plenipotentiary of Japan to Turkmenistan in 2016, and welcomed the reciprocal exemption of diplomatic and official visas between the two countries.

President Berdimuhamedov highly appraised the activities of Japanese corporations in Turkmenistan, and welcomed the further initiatives of Japanese companies there in the future. President Berdimuhamedov also commented on the development in the area of distribution and logistics, as well as raising the level of economic activity to correspond with the untapped potential amount of trade between the two countries.

Prime Minister Abe expressed his appreciation for the anticipated further activities of Japanese corporations in facilitating the sophistication of Turkmenistan’s industries, and welcomed the signing of agreements totaling 2.2 trillion yen in business dealings, on the occasion of this visit.

Prime Minister Abe outlined the Japanese Government’s intent to utilize technical colleges and other institutions of Japanese education in engineering to assist Turkmenistan in the training and development of human resources in advanced industries. Prime Minister Abe also welcomed the progression in preparation for establishing Japanese-style engineering colleges in Turkmenistan, with the involvement of relevant parties of Japan’s academia.

Prime Minister Abe expressed his intent to promote people and cultural exchanges through actively implementing a range of sports programs such as judo, as well as in the areas of Japanese language education and visual contents, so as to deepen mutual understanding between the two countries. Prime Minister Abe also outlined the short-term exchange programme MIRAI, which will select 10 youths from Turkmenistan to join other youths from Europe and Central Asia in visiting Japan.

Prime Minister Abe indicated that Japan will cooperate in facilitating the diplomatic talks known as the “Central Asia plus Japan” Dialogue, which will be held in Turkmenistan in 2016. Both leaders highlighted the importance of anti-terrorism measures, counter narcotics, and border control.

(ii) Prime Minister Abe commented on the problem of transport and logistics, which is a key issue to address in regard to regional development, and invited the Turkmen Minister of Railway Transport, Mr. Bayram Annameredov, to visit Japan within this year.

(i) The two leaders exchanged opinions on regional affairs such as Afghanistan, ISIL, and Iran.

(ii) In regard to North Korea, Prime Minister Abe stated that the country is blatantly violating the United Nations (UN) Security Council Resolution by continuing to develop nuclear weapons and missiles, and that the international society should work together in calling on North Korea to restrain its provocative actions and strictly observe the UN Security Council Resolution. Prime Minister Abe also stated that the North Korea abduction issue is a high priority for Japan, and expressed his hope for the understanding and cooperation of Turkmenistan in working toward an early resolution, while also requesting support for the North Korea human rights resolution.

IV Cooperation in the global arena 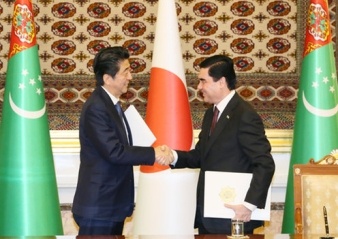 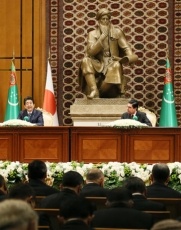 Prime Minister Abe indicated that Japan will make further contributions to the peace and stability of the international society, from the position of “Proactive Contribution to Peace” and also based on the recently enacted “Legislation for Peace and Security”. Prime Minister Abe called for support of Japan’s efforts in this area.

Prime Minister Abe stated that it is important to realize an early start to intergovernmental negotiations based on written agreements, so as to obtain specific outcomes of the reforms of the UN Security Council during the current session of the UN General Assembly. Prime Minister Abe also called for the active support and participation of Turkmenistan in regard to this.

Prime Minister Abe expressed his appreciation to Turkmenistan for their decision to become a cosponsor of the proposal for a UN General Assembly Resolution on designating November 5 as “World Tsunami Day”.

President Berdimuhamedov appraised the activities of Japan in the area of disarmament and their support of the Treaty on a Nuclear-Weapon-Free-Zone in Central Asia (CANWFZ).

On October 23, commencing at 12:10 p.m. local time (October 23 at 4:10 p.m., Japan time) for approximately 15 minutes, Prime Minister Abe held a luncheon with an accompanying economic mission on this visit and relevant parties from Japanese corporations in Turkmenistan, among other attendees.

At the luncheon, Prime Minister Abe commented on the remarkable economic growth of Turkmenistan and the country’s positive sentiment toward Japan, while highlighting its high expectations of Japan in regard to technology and experience.

Furthermore, Prime Minister Abe indicated that the Japanese Government will also provide full cooperation with the activities of Japanese private organizations in Turkmenistan, from the perspective of strengthening bilateral relations.

On October 23, commencing at 4:55 p.m. local time (October 23 at 8:55 p.m., Japan time) for approximately 30 minutes, Prime Minister Abe and President Berdimuhamedov attended a meeting with an accompanying economic mission on this visit.

At the meeting, Prime Minister Abe mentioned the advancement of bilateral relations in a range of fields, which was facilitated by President Berdimuhamedov’s visit to Japan in 2013, highlighting in particular the importance of economic relations.

(ii) In his greeting, Prime Minister Abe commented on the importance of Turkmenistan, which has the world’s second largest reserves of gas fields, while also noting the remarkable progress in economic cooperation between the two countries. Furthermore, Prime Minister Abe outlined advancements made in a variety of business dealings totaling over $18 billion, and expressed his hope to further strengthen Japan-Turkmenistan relations in a wide range of fields.

(iii) This Forum was attended by President Berdimuhamedov and also relevant parties from the public and private economic sectors of both countries. The attendees engaged in a lively exchange of opinions on enhancing Japan-Turkmenistan economic relations. 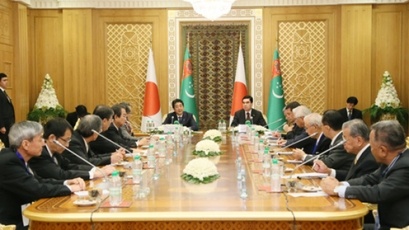 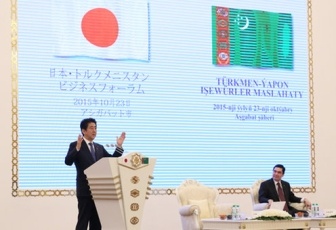 Page Top
Back to Japan-Turkmenistan Relations