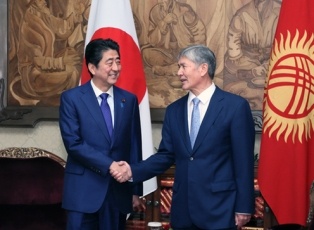 Photo: Cabinet Public Relations Office
An overview of Prime Minister Shinzo Abe’s visit to the Kyrgyz Republic is as follows.

October 26 (Monday)
Summit Meeting with H.E. Mr. Almazbek Atambayev, President of the Kyrgyz Republic
Offering of a floral tribute at the monument to victims of the Aksy events of 2002 and the events of April 2010
Dinner hosted by President Atambayev 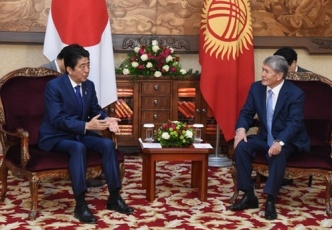 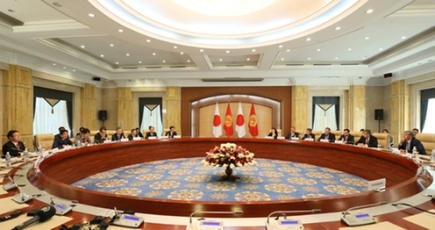 On October 26, commencing at 1:10 p.m. local time until 2:45 p.m., Prime Minister Shinzo Abe, who was on an official visit to Kyrgyzstan, held a summit meeting that ran for approximately 1 hour and 30 minutes with H.E. Mr. Almazbek Atambayev, President of the Kyrgyz Republic.

At the beginning, a meeting of a small group of relevant persons was held for one hour.

President Atambayev first explained that he is extremely grateful that Prime Minister Abe is both the first Japanese Prime Minister as well as the first leader of an advanced democratic country to visit Kyrgyzstan, a democratic country in Central Asia. Following that, President Atambayev expressed gratitude for the economic cooperation extended by Japan thus far, mentioned the significance of the economic mission accompanying Prime Minister Abe on this visit, and expressed expectation of more investment by Japanese companies.

Prime Minister Abe explained that on this trip he will visit all the countries of Central Asia, including Kyrgyzstan, which indicates just how much importance he attaches to Central Asia, and he thanked Kyrgyzstan for its significant cooperation in resolving a previous incident involving the abduction of Japanese nationals. Following that, Prime Minister Abe explained that the President’s visit to Japan in 2013 brought huge momentum to the relationship between the two countries, and the Prime Minister also mentioned a decision to introduce multiple entry visas for diplomatic and official passport holders, and stated that Japan will continue its support for the development of Kyrgyzstan, with which Japan shares common values such as democracy.

Prime Minister Abe explained that Japan will cooperate in order to protect the heritage of the Silk Road, which was inscribed on the World Heritage List last year, and will also dispatch cultural missions to proactively implement Japanese language education, video content, sports and other programs in order to deepen mutual understanding between the two countries, as well as invite 10 Kyrgyz youths to Japan through the short-term exchange programme MIRAI. Following that, Prime Minister Abe thanked President Atambayev’s high appreciation of the Japan Overseas Cooperation Volunteers (JOCV), and explained that such initiatives will continue going forward.

(i) Prime Minister Abe explained that he is delighted at the cooperation taking place through the “Central Asia plus Japan” dialogue and progress being made with agricultural projects as a result of the dialogue’s framework. Prime Minister Abe stated that a major topic in next year’s “Central Asia plus Japan” Dialogue / Foreign Ministers’ Meeting is transportation and distribution, which are the region’s most important challenges, and cooperation will be deepened in these fields.

(ii) Prime Minister Abe mentioned cooperation with Kyrgyzstan on anti-drug measures and border control, and requested the understanding and support of the President with regard to the implementation of bilateral cooperation related to water problems, which are a significant challenge for the region, with the aim of alleviating such problems.

(i) The two leaders exchanged views on Afghanistan, ISIL, and extremism, and Prime Minister Abe explained the Japan-China relationship.

(ii) In regard to North Korea, Prime Minister Abe stated that the country is blatantly violating the United Nations (UN) Security Council Resolution by continuing to develop nuclear weapons and missiles, and that the international society should work together in calling on North Korea to restrain its provocative actions and strictly observe the UN Security Council Resolution. Prime Minister Abe also stated that the North Korea abduction issue is a high priority for Japan, and expressed his hope for the understanding and cooperation of Kyrgyzstan in working toward an early resolution. 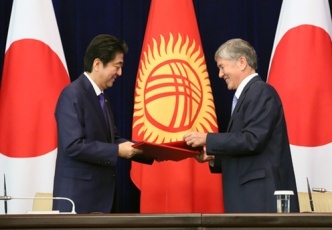 Prime Minister Abe indicated that Japan will make further contributions to the peace and stability of the international community, from the position of “Proactive Contribution to Peace” and also based on the recently enacted “Legislation for Peace and Security”. Prime Minister Abe called for support of Japan’s efforts in this area.

Prime Minister Abe stated that it is important to realize an early start to intergovernmental negotiations based on written agreements, so as to obtain specific outcomes of the reforms of the UN Security Council during the current session of the UN General Assembly. Prime Minister Abe also called for the active support and participation of Kyrgyzstan in regard to this.

In addition to President Atambayev’s spouse, the dinner was also attended by Kyrgyz Cabinet ministers and other officials. At the beginning, President Atambayev made a speech and introduced his strong interest in Japanese literature, films and other culture. Prime Minister Abe expressed gratitude for the warm reception, and noted that this visit to Kyrgyzstan is the first by a Japanese Prime Minister. Prime Minister Abe mentioned the history of Japanese detainees 70 years ago and Kyrgyzstan’s support at the time of the Great East Japan Earthquake four years ago, and expressed expectation over the friendship between the two countries and Kyrgyzstan’s development going forward. Following that, the dinner was held in a genial and harmonious atmosphere throughout.