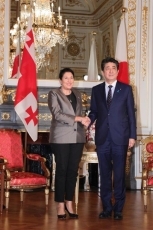 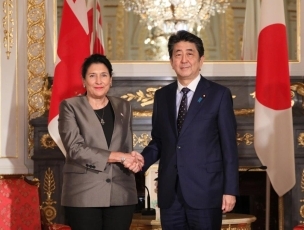 On October 24, commencing at around 6:15 p.m. for approximately 10 minutes, Mr. Shinzo Abe, Prime Minister of Japan, held a meeting with H.E. Ms. Salome Zourabichvili, President of Georgia. The overview of the meeting is as follows.

Prime Minister Abe welcomed President Zourabichvili's visit to Japan and stated that “Japan emphasizes its relationship with Georgia, which shares universal values such as freedom, democracy, human rights, and rule of law”.


In response, President Zourabichvili expressed her appreciation for the invitation, congratulated the Emperor's throne on behalf of the Georgian people, and wished for peace and prosperity of the Japanese people.

Prime Minister Abe, concerning bilateral relations, stated that “I am delighted that there have been active high-level visits between the two countries in recent years,” and “the interest of Japanese companies is also increasing under the Georgia’s favorable business environment, and the early conclusion of the Investment Agreement is important in order to further stimulate the business exchanges".
In response, President Zourabichvili stated that her role as Georgian President is to make the country well known in order to promote the connection in the field of economy, culture and sports between the two countries, which have old culture and civilization. President Zourabichvili also agreed with the importance of the Investment Agreement and expected to further strengthen the relationship.
During the meeting they also talked on issues such as Rugby World Cup with the participation of the Georgia national team, the success of Georgian Sumo wrestler Tochinoshin and popularization of Georgia wine.

Both sides also exchanged their opinions on regional issues, and Prime Minister Abe asked for understanding and cooperation for the early resolution of the abductions issue.

Page Top
Back to Japan-Georgia Relations