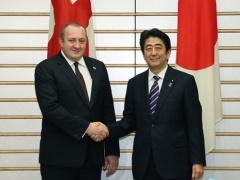 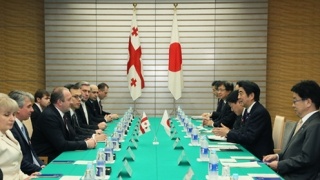 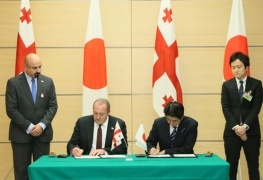 (Photo: Cabinet Public Relations Office)
H.E. Mr. Giorgi Margvelashvili, President of Georgia, made a working visit to Japan from October 21 to 25. The main events and overview are as follows.

(c) The peace and stability of the international community

After the meeting ended, the two leaders signed the "Joint Statement between Japan and Georgia on "Solidarity for Peace and Democracy"" (English (PDF)

). This was followed by a dinner hosted by Prime Minister Abe and his wife, which took place in an extremely relaxed atmosphere.

(Open a New Window)
Page Top
Back to Japan-Georgia Relations