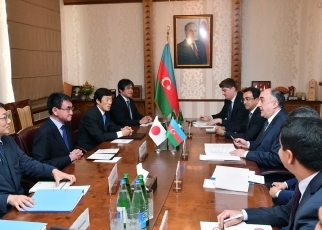 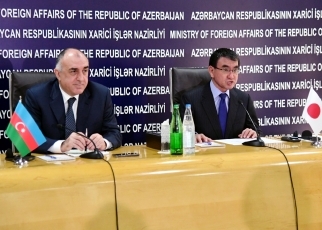 On September 5, commencing at 11:30 a.m. (local time, as well as meeting below) for approximately 70 minutes, Mr. Taro Kono, Minister for Foreign Affairs, who is visiting Azerbaijan, held a foreign ministers' meeting with H.E. Mr. Elmar Mammadyarov, Minister of Foreign Affairs of the Republic of Azerbaijan. Following a joint press announcement, commencing at 1:00 p.m, Foreign Minister Mammadyarov held an exchange of opinions over lunch lasting for approximately 60 minutes. The overview is as follows.

1. Beginning of the meeting

Minister Kono stated that it was pleasure for him to visit Azerbaijan as to be Japanese Minister for Foreign Affairs for the first time in 19 years, and expressed gratitude for the condolence message from Foreign Minister Mammadyarov for the Heavy Rain Event in July. In addition, he stated that Japan gives high place to the bilateral relation with Azerbaijan, which is positioned at focal point connecting Europe, Asia, and the Middle East and plays a key role in international energy security and regional development. He also expressed his willingness to cooperate with Foreign Minister Mammadyarov in order to elevate the two countries’ friendly relations to a new stage.

Foreign Minister Kono explained the “Japan’s Caucasus Initiative”, which comprises the two pillars: (1) assistance for human resources development of architects for state building (human resources development); and (2) assistance for paving the way to “Appealing Caucasus” (infrastructure development and business environment improvement support) and stated that this initiative would be Japan’s ground design of further cooperation for self-sustained development of the Caucus region, which is the gateway connecting Asia and Europe. While he expressed his expectations towards the future development of the two countries’ cooperative relations, he also informed that, as a part of the Initiative, Japan had decided launching formal negotiations of the bilateral toward an investment treaty with Azerbaijan as well as easing visa requirements (beginning of insurance of multiple entry visas for short-term stay) for nationals of Azerbaijan.

In response, Foreign Minister Mammadyarov welcomed “Japan’s Caucus Initiative”, and stated that he would like to develop a more concrete cooperation in various fields including human resource development, infrastructure, and people-to-people exchanges.

Both ministers exchanged views on the regional affairs, including the situations in the East Asia, the Caucasus, and the Middle East, as well as “GUAM+Japan” framework and so on.

Regarding the North Korea situation, Minister Kono explained the importance of full implementation of the United Nations Security Council Resolutions for the denuclearization of the Korean Peninsula and requested support and understanding for the early resolution of the abduction issue, and received the understanding of Foreign Minister Mammadyarov.

Page Top
Back to Japan-Azerbaijan Relations