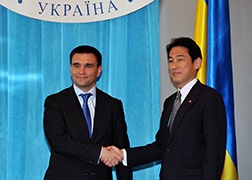 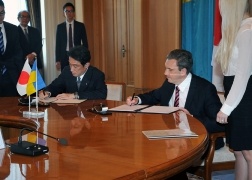 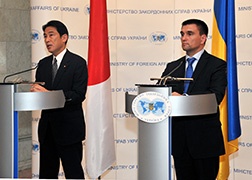 On Thursday, July 17, commencing at 1:30 p.m. for approximately one hour and 10 minutes, Minister for Foreign Affairs Mr. Fumio Kishida, who was visiting Ukraine, held a meeting with H.E. Mr. Pavlo Anatoliyovych Klimkin, Minister of Foreign Affairs of Ukraine. The overview of the meeting is as follows.

At the beginning, Minister Kishida said that Ukraine is facing the most difficult period in its history, and the Government of Japan is proactively supporting initiatives to ensure the stability of Ukraine and to press forward with democratization and the transition to a market economy. Minister Kishida also said that Japan believes it is important to resolve problems peacefully, and hopes the situation in Eastern Ukraine will be stabilized as quickly as possible through dialogue with Russia and the separatists. In response, Minister Klimkin expressed gratitude for Japan’s proactive contribution toward resolving the Ukrainian crisis promptly.

2. The situation in Ukraine and support for the promotion of domestic reforms

Both foreign ministers shared recognition on encouraging Ukraine’s policital and economic reform efforts, and on bilateral cooperation to further extract the potential in the relationship between the two countries. Specifically, Minister Kishida explainedJapan’s assistance including the following.

In response, Minister Klimkin explained the reforms being pursued by the Government of Ukraine and the situation etc. in Eastern Ukraine, along with expressing deep gratitude for Japan’s support.
In addition, both foreign ministers acknowledged that in order to further strengthen economic relations between the two countries, the bilateral investment treaty that is currently being negotiated will be important, and they shared the view that the negotiations on the treaty will be expedited.

Minister Kishida explained Japan’s policy of “Proactive Contribution to Peace,” which involves contributing more proactively to the peace and stability of the international community, and the initiatives being implemented from that standpoint, including a Cabinet decision on basic policies on the development of seamless security legislation. Additionally, Minister Kishida explained the situation in East Asia.

4. Cooperation on aftermath response to accidents at nuclear power stations

Both foreign ministers acknowledged that Japan and Ukraine share the unfortunate experience of nuclear power station accidents, and that to share the experience of Fukushima and Chernobyl between the two countries and cooperate with each other will be meaningful. The foreign ministers also welcomed the launch of a Ukranian-made “Dnipro” rocket fitted with Japanese-made ultrasmall satellites last month as one part of the Fukushima/Chernobyl Joint Satellite Observation Project. Additionally, Minister Kishida proposed holding the third meeting of the Japan-Ukraine Joint Committee for the cooperation to advance aftermath response to accidents at nuclear power stations this year in Japan, and that participants from Ukraine inspect Fukushima Daiichi Nuclear Power Station on that occasion. Minister Klimkin expressed his support for the proposal.