Meeting between Prime Minister Abe and President Pahor of Slovenia 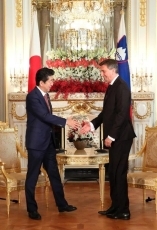 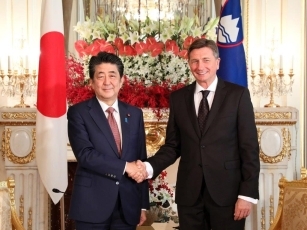 On October 23, commencing at 9:05 a.m. for approximately 15 minutes, Mr. Shinzo Abe, Prime Minister of Japan, held a meeting with H.E. Mr. Borut Pahor, President of the Republic of Slovenia during his visit to Japan. The overview of the meeting is as follows. Attendees of the meeting from Japanese side are Mr. OKADA Naoki, Deputy Chief Cabinet Secretary and others, and from the Slovenian side Dr. Alja Brglez, Head of the Cabinet of the President, H.E. Dr. Ana Polak Petrič, Ambassador Extraordinary and Plenipotentiary of Slovenia to Japan, and others.

Prime Minister Abe stated, “Slovenia is an important partner for Japan that shares fundamental values and the importance of maintaining integrity in Europe.” Prime Minister Abe also stated, “We hope Japan and Slovenia, a country which is strong in the IT and advanced technology fields and has geographical advantages in European logistics, can work together toward further expanding the economic relationship.” In response, President Pahor stated “Though Slovenia and Japan maintain friendly bilateral relations, there is a room for expansion. Slovenia would like to cooperate with Japan to further promote political and economic relations and also exchanges in science and technology fields. Also, Slovenia highly evaluates Japanese business culture, with which Japanese companies fit into Slovenian locals. Slovenia welcomes expansion of investment from Japan.” Furthermore, Prime Minister Abe and President Pahor exchanged and shared the views that they would cooperate to expand bilateral exchanges toward the Tokyo Olympic and Paralympic Games.

Page Top
Back to Japan-Slovenia Relations