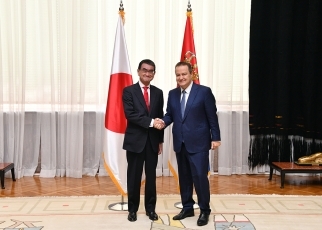 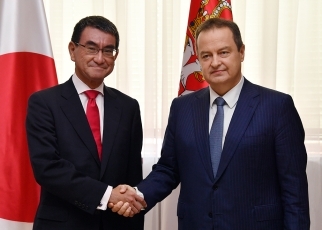 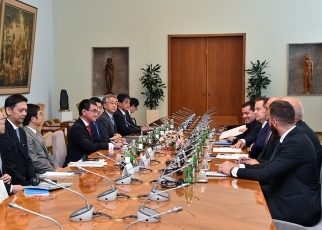 On August 15, commencing at 12:50 p.m. (local time; 7:30 p.m. Japan time) for approximately 110 minutes, Mr. Taro Kono, Minister for Foreign Affairs of Japan, held a Foreign Ministers’ Meeting and working lunch with H.E. Mr. Ivica Dačić, First Deputy Prime Minister and Minister of Foreign Affairs of the Republic of Serbia during the visit to Belgrade. The overview of the meeting is as follows.

Minister Dačić welcomed Minister Kono and stated that he regards Minister Kono’s visit as highly important. Minister Kono mentioned that this is the first visit by the Foreign Minister of Japan to Serbia in 18 years and expressed his wish to realize more frequent exchanges.

Both ministers welcomed the recent investment projects by Japanese companies in Serbia. Minister Kono stated that it is important for Japanese companies to learn how attractive Serbian business environment, such as high-skilled workforce and remarkable progress in economic reform and fiscal consolidation in recent years, to develop economic relations. In response, Minister Dačić said that the trade and investment relationship between the two countries is expanding and welcomed further investments by Japanese companies by pointing out remarkable advantages such as the Free Trade Agreements with many countries which allow great access to large markets.

Furthermore, the two ministers exchanged views and reaffirmed the importance of promoting tangible cooperation in such fields as science and technology, environment protection towards 2022, the year marking the 140th anniversary of Japan-Serbia Friendship.

The two ministers also exchanged views on the situation in Western Balkan region.

The two ministers exchanged views on situations in East Asia and Europe, and agreed to coordinate towards the denuclearization of North Korea.

Page Top
Back to Japan-Serbia Relations