Meeting between Prime Minister Abe and President of Romania Iohannis 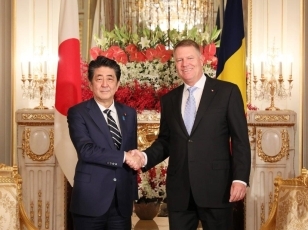 (Photo: Cabinet Public Relations Office)
On October 21, commencing at 1:30 p.m. for approximately 10 minutes, Mr. Shinzo Abe, Prime Minister of Japan, held a summit meeting with H.E. Mr. Klaus-Werner IOHANNIS, President of Romania. The overview of the meeting is as follows. The meeting was also attended by Mr. OKADA Naoki, Deputy Chief Cabinet Secretary, Mr. HAYASHI Hajime, Assistant Chief Cabinet Secretary, and Mr. HASEGAWA Eiichi, Special Advisor to the Prime Minister from the Japanese side, and by Mr. Bogdan AURESCU, Presidential Advisor on Foreign Policy, and Mrs. Svetlana Tatiana IOSIPER, Ambassador Extraordinary and Plenipotentiary of Romania to Japan from the Romanian side.

1. Opening Remarks
After welcoming President Iohannis to Japan, Prime Minister Abe referred to the fact that they had pledged to strengthen relations towards building a strategic partnership in the summit meeting during his visit to Romania in January 2018. He stated, “I strongly believe that we can build meaningful cooperation with Romania, which has been increasing its presence in the European region.”

In response, President Iohannis appreciated the invitation to the Ceremony of the Enthronement of His Majesty the Emperor at the Seiden and congratulated on the Throne and the new era of Reiwa, while expressed his heartfelt sympathy to those affected by Typhoon Hagibis.

2. With regard to bilateral relations, Prime Minister Abe stated, “Given that 2021 marks the 100th anniversary of the establishment of diplomatic relations between our countries, I would like to make it a significant year in which we further elevate our good relations,” and “I welcome the steady developments of ‘Bucharest International Airport Rail Access Link Project’, a yen loan project, and I hope that the development of transportation infrastructure will help to further improve the business environment which leads to expansion of investment by Japanese companies in Romania.”

In response, President Iohannis stated, “I would like to deepen the bilateral cooperation in various fields toward a strategic partnership. In particular, in cultural field, I would like to work together for promoting people-to-people exchanges between our two countries by utilizing the opportunity that Timișoara is going to a European Capital of Culture 2021.”

Prime Minister Abe stated “Sibiu International Theatre Festival is a desired place for Japanese theatre personnel which contributes to promote exchanges. Also, I expect that National team of Romania will perform well in the Tokyo Olympic and Paralympic Games next year. I wish to deepen exchanges between the two countries in various opportunities.

3. Both leaders exchanged views on regional situations. Prime Minister Abe requested continued understanding and cooperation towards the early resolution of the abductions issue. In response, President Iohannis expressed his support for Japan’s position.

Page Top
Back to Japan-Romania Relations