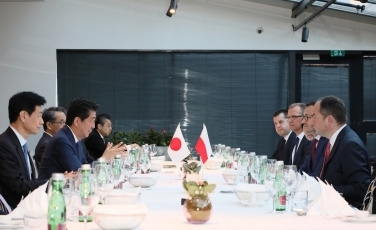 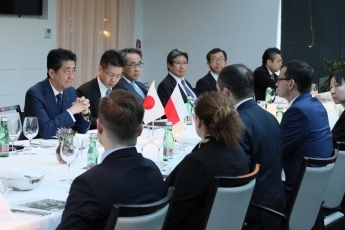 On Wednesday, April 24, commencing at 7:20 p.m. (local time) for approximately 75 minutes, Prime Minister Shinzo Abe, during his visit to the Slovak Republic, held a summit meeting (working dinner) with H.E. Mr. Mateusz Morawiecki, Prime Minister of the Republic of Poland. The summary of the meeting is as follows.

Prime Minister Abe stated that this year marks the 100th anniversary of the establishment of diplomatic relations between Japan and Poland, expressing his intention to foster momentum for the anniversary together with Poland. He also welcomed developments in the strategic partnership, stating that he hopes to continue to closely cooperate with Poland expanding presence in the international community. In response, Prime Minister Morawiecki appreciated that he could meet with Prime Minister Abe soon after the previous meeting, pointing out that Poland is increasing importance within the European Union (EU) and that he would like to pursue a strategic relationship with Japan.

Prime Minister Abe stated that various events, including cultural exchanges and economic seminars are planned to be held to commemorate the 100th anniversary, and that he hopes to further deepen mutual understanding between the people of the two countries through these events. He also noted that Japan seeks to further expand people-to-people exchanges under the working holiday program.

Prime Minister Abe referred to the sound economic relations between Japan and Poland, noting that approximately 300 Japanese companies are doing business in Poland and that the direct flights between Narita and Warsaw that began in 2016 were increased in March this year to seven times a week. The two leaders confirmed that taking the opportunity of the entry into force of the Japan-EU Economic Partnership Agreement (EPA) the two countries will continue to cooperate to further develop bilateral economic relations.

The two leaders affirmed that the two countries have advanced cooperation in various fields, in line with the “Action Plan for the Implementation of the Strategic Partnership between the Government of Japan and the Government of the Republic of Poland”, and welcomed the latest developments including the signing of a memorandum of cooperation in the field of clean coal technology.

The two leaders exchanged views on the regional and international situation, including the issue of North Korea. Prime Minister Abe requested understanding and cooperation for the early resolution of the abduction issue, a top priority for the Abe administration, and received the support of Prime Minister Morawiecki.