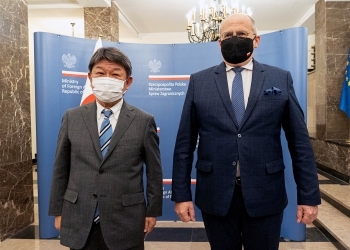 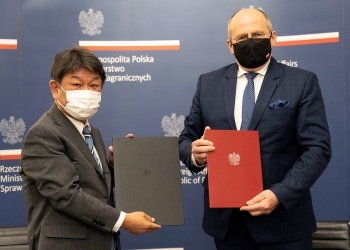 On May 6, commencing at 6:00 p.m. (local time; on May 7, 1:00 a.m. JST) for 2 hours and 20 minutes, Mr. MOTEGI Toshimitsu, Minister for Foreign Affairs of Japan, who is visiting Poland, held a Japan-Poland Foreign Ministers' Meeting with H.E. Prof. Zbigniew RAU, Minister of Foreign Affairs of the Republic of Poland. The overview of the meeting is as follows.
After the meeting, the two ministers signed the Action Plan for the Implementation of the Strategic Partnership between Japan and Poland from 2021 to 2025.

A framework for regional cooperation comprising of Poland (currently the chair), Hungary, Slovakia and the Czech Republic. It was founded in 1991 in Visegrád, Hungary. In addition to dialogues held between leaders, foreign ministers, and senior officials, cooperation in the framework “V4 + Japan” is also being promoted in a wide range of fields such as science and technology, third country support, disaster prevention, and the environment.

The Three Seas Initiative was launched in 2015 under the initiative of Poland and Croatia, and aims to strengthen connectivity along a north-south axis as well as to close the gap between the East and the West in the Central and Eastern Europe and the Baltic regions. The initiative focuses on infrastructure development in the energy, transport, and digital sectors in the region surrounded by the Baltic Sea, the Adriatic Sea and the Black Sea. Now twelve countries including the V4 countries are the members of this forum.