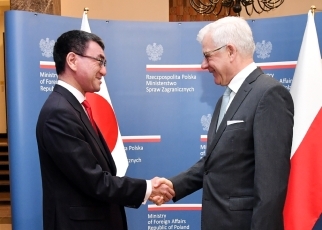 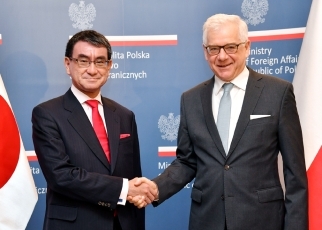 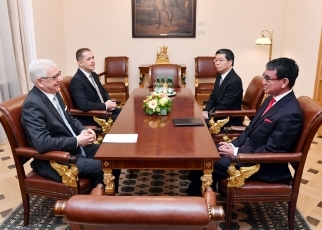 On Friday, July 6, commencing at 9 a.m. (local time) for approximately 95 minutes, Mr. Taro Kono, Minister for Foreign Affairs, held a meeting with H.E. Dr. Jacek Czaputowicz, Minister for Foreign Affairs of the Republic of Poland, in Warsaw during his visit to Poland. (A one-on-one tete-a-tete meeting for the first 30 minutes and an overall meeting for the subsequent 65 minutes was followed by a working lunch commencing at 12:10 p.m. for approximately 60 minutes). The overview is as follows.

At the beginning, Minister Czaputowicz noted that the relationship between Poland and Japan was elevated to a strategic partnership and they signed the action plan for the strategic partnership in May 2017, and explained that he is pleased to have the opportunity to welcome Minister Kono and deepen the bilateral relationship ahead of the 100th anniversary of the establishment of diplomatic relations next year. Minister Czaputowicz stated that Japan was one of the first countries to recognize Poland’s restoration of independence 100 years ago, and he hopes to use this opportunity to cooperate at the governmental and parliamentary levels.

In response, Minister Kono explained that he intends to coordinate closely with Poland, which is currently a member of the United Nations Security Council (UNSC), on challenges facing the international community including the North Korea problem. Minister Kono expressed the view that amid the various challenges facing the international community, it will be important for Japan and Poland, which share fundamental values, to strengthen their cooperation as strategic partners.

The two ministers confirmed that against the backdrop of the robust Polish economy, investment in Poland by Japanese companies has been growing, and people-to-people exchanges have been increasing as a result of direct flights, and in light of this the economic relationship will be expanded further.

With regard to the North Korea issue, the two ministers shared the view that it is still necessary for North Korea to abandon all weapons of mass destruction and ballistic missiles of all ranges in a complete, verifiable, and irreversible manner, and to firmly fulfill the UNSC resolutions. In addition, Minister Kono asked for understanding and cooperation on promptly resolving the abductions issue.

Furthermore, toward the success of COP24 (the 24th Conference of the Parties to the United Nations Framework Convention on Climate Change), the two ministers confirmed cooperation between Japan and Poland, as the host of the COP24.

The two ministers also discussed cooperation in the international arena, and confirmed that Japan and Poland, which currently serves as a non-permanent member of the UNSC, will strengthen their coordination for the purpose of resolving various problems facing the international community.