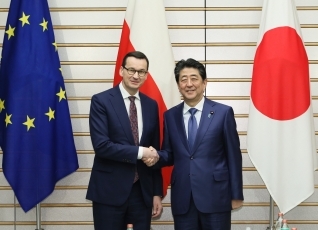 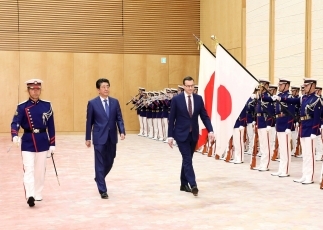 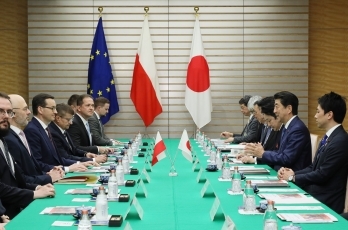 On January 21, commencing at around 5:45 p.m. for approximately 50 minutes, Mr. ABE Shinzo, Prime Minister of Japan, held a summit meeting with H.E. Mr. Mateusz Morawiecki, Prime Minister of the Republic of Poland, who was paying an official working visit to Japan. The meeting was attended by Mr. KOIZUMI Shinjiro, Minister of the Environment, Mr. NISHIMURA Akihiro, Deputy Chief Cabinet Secretary, and others from the Japanese side and by H.E. Dr. Michał Kurtyka, Minister of Climate, and others from the Polish side. Following the Summit meeting, a banquet hosted by Prime Minister Abe took place in a relaxed atmosphere where on the Prime Ministers exchanges their views on a broad range of topics, including economic and cultural exchanges. The overview of the summit meeting is as follows.

(1)Prime Minister Abe welcomed Prime Minister Morawiecki’s first visit to Japan, stating, “On the occasion of last year’s 100th anniversary of the establishment of diplomatic relations between Japan and Poland, many high level visits realized, including the visit to Poland by Their Imperial Highnesses Crown Prince and Crown Princess Akishino, and various cultural programs were held, and they have significantly deepened the friendship between the two countries; today, I look forward to holding meaningful discussions so that we, as strategic partners, can elevate our bilateral relationship to the next level.”

(2)In response, Prime Minister Morawiecki stated: “Thank you for your invitation. I vividly remember the visit by Their Imperial Highnesses Crown Prince and Crown Princess Akishino, and I was honored to have an audience with Their Imperial Highnesses today. I am very pleased that the 100th anniversary of the establishment of Japan-Poland diplomatic relations has led to the deepening of our bilateral relations. I will work to further vitalize our bilateral exchanges in political, economic, and cultural fields.”

(1) Political and Security issues
Prime Minister Abe welcomed that the bilateral cooperation has made progress in various areas, in line with the Action Plan for the Implementation of the Strategic Partnership for the years 2017–2020. Prime Minister Abe expressed the view that Japan would like to deepen its cooperation with Poland, a country enjoying solid economic growth and gaining increasing importance in the European Union (EU), and that he intends to promote Japan-U.S.-European coordination and “V4+Japan” cooperation. Furthermore, Prime Minister Abe expressed an intention to begin working on drafting Action Plan based on the outcomes of Prime Minister Morawiecki’s visit. Prime Minister Abe also stated, “Japan hopes to expand security dialogues with Poland, which is fulfilling an important role in European security.”
In response, Prime Minister Morawiecki stated: “The strategic partnership between Japan and Poland is critical, and our relations have deepened in a variety of areas. The two countries share the view on many issues, such as the importance of free trade. Poland is in close relation with Europe, the United States, and Japan, and intends to work with Japan to resolve various issues. Poland also attaches importance to strengthening political relations with Japan. The V4 is increasing its importance, and I intend to work to strengthen the V4-Japan cooperation.”

(2) Economic relations
Prime Minister Abe stated: “At last April’s meeting, we confirmed cooperation for expanding our economic relations. I welcome new investments and the progress since then such as new investments in Poland and holding of business seminars. During this visit, I believe you gained a firsthand sense of potential for new business with Japanese companies. I intend to further develop our cooperation in the energy sector, including clean coal, hydrogen, and nuclear power.” Prime Minister Abe also referred to the signing of a memorandum of cooperation on hydrogen technology between Toyota Motor Corporation and Polish companies. In addition, Prime Minister Abe welcomed the progress made in the discussions on cooperation forthe Central Communication Port (CPK) project. Furthermore, Prime Minister Abe referred to the signing of a memorandum of cooperation between the two countries on certification of seafarer service, and confirmed to launch informal consultations toward concluding a social security agreement to further promote economic and people-to-people exchanges.
In response, Prime Minister Morawiecki stated: “During this visit to Japan, I was able to hold talks with a range of stakeholders regarding energy and infrastructure cooperation between Poland and Japan, as well as talks with Japanese companies that are doing business in Poland. In the energy sector, Poland would like to work with Japan to reduce its dependence on coal. Use of nuclear power is also a key issue. We hope that Japan will make new investments and expand investments in Poland.”

(4) Cultural and people-to-people exchanges
Prime Minister Abe stated: “This year marks the 100th anniversary of Japan’s acceptance of Polish orphans who had been destitute in Siberia, and on this occasion, commemorative events will be held by local governments and associations that accepted the orphans. I hope that such initiatives will further deepen Japan-Poland exchanges and mutual understanding.”
Prime Minister Morawiecki explained his thoughts about discussing additional initiatives for strengthening cultural exchanges between Japan and Poland. In this connection, Prime Minister Morawiecki stated, “A great many Japanese people are expected to participate in this year’s Chopin Piano Competition, and I wish them all the best.”

The two leaders exchanged views regarding the situations in East Asia and Europe, and shared the view that Japan and Poland, as strategic partners, will coordinate with each other toward maintaining and strengthening an international order based on the rule of law. Regarding North Korean issue, the two leaders shared the view on continuing to work closely toward the complete denuclearization of North Korea, including full implementation of United Nations Security Council resolutions. In addition, Prime Minister Abe asked for Prime Minister Morawiecki’s understanding and cooperation for the early resolution of the abductions issue, a top priority for Japan, and obtained the Prime Minister’s support.
The two leaders also exchanged views regarding the Brexit, and shared the view that it is important for both the EU and Japan to build close relations with the United Kingdom after its withdrawal from the EU.

(Note) V4 (Visegrad Group)
A sub regional cooperation framework consisting of the Czech Republic, Hungary, Poland, and Slovakia.
The group was founded in Visegrad in Hungary in 1991.