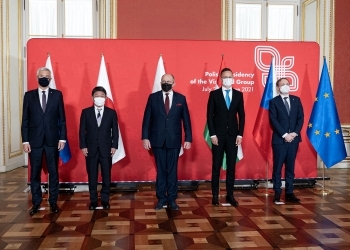 As the Chair, Minister Rau stated that he was pleased to hold the “V4 plus Japan” Foreign Ministers’ Meeting in a commemorative year marking the 30th anniversary of the establishment of the Visegrad Group, and would further promote “V4 plus Japan” cooperation. Minister Motegi responded that, as the international community faces challenges such as protectionism and unilateral attempts to change the status quo by force or coercion amid the COVID-19 pandemic, Japan attaches great importance to cooperation with the Visegrad Group, whose presence in the EU is growing.

Minister Motegi and the V4 ministers shared the view to advance Japan-EU cooperation in various fields such as sustainable connectivity, quality infrastructure, and global issues. The V4 side expressed expectations for Japan’s cooperation in the “Three Seas Initiative” which has been led by Poland, and Minister Motegi stated that Japan will continue considering its engagement under the initiative. Regarding the COVID-19 response, the ministers also agreed to promote cooperation in fields such as equitable access to vaccines and World Health Organization reform. In addition, Minister Motegi requested the V4 ministers’ cooperation for the lifting of the EU’s import restriction measures on Japanese food products that have been introduced following the Great East Japan Earthquake.

Minister Motegi welcomed the European Council’s conclusion on “EU Strategy for cooperation in the Indo-Pacific” as a sign of EU’s strong will to engage with the Indo-Pacific, and stated that he expects the V4’s active contribution to the formulation of a joint EU communiqué. In response, the V4 ministers expressed their willingness to constructively contribute to the formulation of the communiqué in coordination with Japan.

Minister Motegi expressed serious concerns about the continued and strengthened unilateral attempts to change the status quo in the East and South China Seas including China’s Coast Guard Law, as well as the situation surrounding Hong Kong and the Xinjiang Uygur Autonomous Region. The ministers shared the view on the importance of the maintaining and enhancing the free and open international order based on the rule of law. Furthermore, the ministers confirmed that full implementation of the UN Security Council resolutions was essential to achieve the complete, verifiable, and irreversible dismantlement of all North Korea’s weapons of mass destruction and ballistic missiles. Minister Motegi asked for understanding and cooperation for the immediate resolution of the abductions issue.

A framework for regional cooperation comprising of Poland (current Presidency), Hungary, the Slovak Republic and the Czech Republic. It was founded in 1991 in Visegrád, Hungary. In addition to dialogues held between leaders, foreign ministers, and senior officials, cooperation in the framework “V4 + Japan” is also being promoted in a wide range of fields such as science and technology, third country support, disaster prevention, and the environment.

The Three Seas Initiative was launched in 2015 under the initiative of Poland and Croatia, and aims to strengthen connectivity along a north-south axis as well as to close the gap between the East and the West in the Central and Eastern Europe and the Baltic regions. The initiative focuses on infrastructure development in the energy, transport, and digital sectors in the region surrounded by the Baltic Sea, the Adriatic Sea and the Black Sea. Now twelve countries including the V4 countries are the members of this forum.