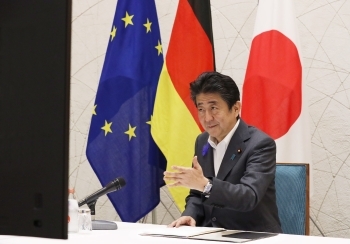 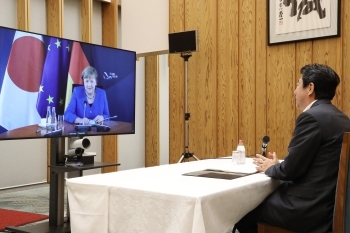 On July 16, commencing at 6:30 p.m. for approximately 35 minutes, Prime Minister of Japan ABE Shinzo held a Japan-Germany leaders video teleconference meeting with H.E. Dr. Angela Merkel, Federal Chancellor of the Federal Republic of Germany. The overview is as follows:

Prime Minister Abe paid tribute to Germany's success in containing the spread of the novel coronavirus disease (COVID-19), adding that “the international order is facing serious challenges as a result of the spread of COVID-19, and the responsibility of Japan and Europe, with their shared universal values, is greater than ever.”
In response, Chancellor Merkel began by expressing her sympathy for the disastrous torrential rain in Japan, adding that “the international community is being challenged as never before by COVID-19, and I hope that Japan and Germany will cooperate with each other. Japan's efforts to combat COVID-19 have been very successful, and I hope that Germany can learn from Japan's methods.”

Prime Minister Abe expressed his intent to contribute to the development and distribution of vaccines by means of the Access to COVID-19 Tools (ACT) Accelerator, while Chancellor Merkel stated that Germany, as holder of the EU Presidency, would work to secure vaccines and therapeutic drugs. The two leaders confirmed that they will also work together on support for developing countries, including the Sahel region in Africa, and agreed on the importance of moving forward with the process of investigating and reforming the WHO. The two leaders also discussed the impact of the COVID-19 outbreak on the global economy, mutually explained their countries’ respective economic measures, and exchanged views on the importance of increasing investment in innovation in terms of developing a highly secure and reliable information and communications infrastructure.

In relation to Germany’s assumption of the Presidency of the EU, Prime Minister Abe expressed his expectations for Germany's leadership in holding the EU Presidency, suggesting that Europe is stronger united, and the two leaders agreed to work together for the success of the G7 Summit. The two leaders also exchanged views on cooperation in the Indo-Pacific region and agreed to work together to revitalize German-Japanese relations, as next year will mark not only the hosting of the Tokyo Olympics and Paralympics, but also the 160th anniversary of Japan-Germany relations.

The two leaders also discussed various regional situations. On the matter of North Korea, Prime Minister Abe sought understanding and cooperation for the swift resolution of the abductions issue, which is a top priority for Japan and obtained Chancellor Merkel’s support. Both leaders affirmed that they would continue to work together closely on the issue. They also exchanged views on the global implications of the US-Russia dialogue on arms control. The two leaders expressed concern about the enactment of the national security law in Hong Kong, stating that it undermines Hong Kong's autonomy under the “One Country, Two Systems” framework.