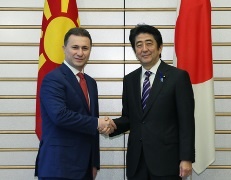 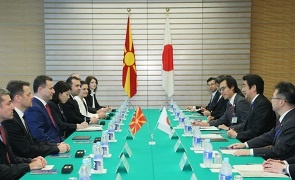 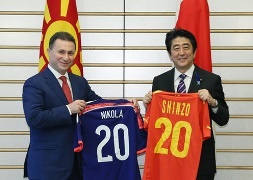 On July 1, commencing at 10:50 a.m. for approximately 30 minutes, Prime Minister Shinzo Abe held a summit meeting with H.E. Mr. Nikola Gruevski, Prime Minister of the Former Yugoslav Republic of Macedonia, during his visit to Japan. The overview of the meeting is as follows.

Prime Minister Abe mentioned that Japan recently decided to launch the Japan-Macedonia Parliamentary Friendship League, and expressed expectation that parliamentary exchanges will gain momentum. Additionally, Prime Minister Abe said Japan appreciates Macedonia’s efforts to reform in the interests of joining NATO and the EU, along with mentioning that Japan has extended approximately 41 billion yen of support to Macedonia thus far. Prime Minister Gruevski expressed gratitude for Japan’s support up to now. He also explained that the investment environment in Macedonia is improving, along with saying he strongly hopes to promote bilateral economic relations in the future.

Prime Minister Abe explained that from the standpoint of a “proactive contribution to peace,” Japan will contribute even more to the peace and stability of the regional and international communities. In response, Prime Minister Gruevski expressed understanding and support for Japan’s “proactive contribution to peace” and said he wants to continue to strengthen bilateral cooperation in the international arena in the future.

(* The foregoing is a provisional translation. The date indicated above denotes the date of issue of the original press release in Japanese.)
Page Top
Back to Countries & Regions