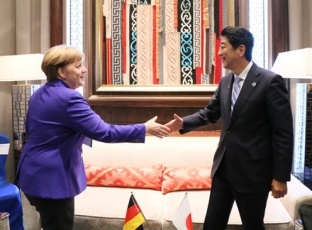 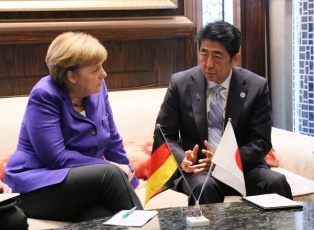 Photo: Cabinet Public Relations Office
On Friday, July 15, commencing at around 10:50 a.m. (local time) for approximately 25 minutes, Mr. Shinzo Abe, Prime Minister of Japan, who is currently in Ulaanbaatar (Mongolia) attending the Asia-Europe Meeting (ASEM), held a summit meeting with H.E. Dr. Angela Merkel, Federal Chancellor of the Federal Republic of Germany. The overview of the meeting is as follows.

Prime Minister Abe stated that he strongly condemns the incident that occurred in Nice today if it was an act of terrorism. He expressed his pleasure at having the opportunity to meet with Chancellor Merkel again following the Ise-Shima Summit and congratulated her on her birthday, which was coming up in two days.

Chancellor Merkel once again expressed her condolences in regard to the Dhaka terrorist incident. Both leaders agreed to work together even more closely in addressing terrorism.

The two leaders confirmed the need to deal with the risk of the United Kingdom’s vote to leave the European Union (EU) and the deceleration in emerging economies that is affecting the global economy and confirmed the importance of close collaboration in light of the agreement at the Ise-Shima Summit.

Prime Minister Abe requested cooperation between the EU and the United Kingdom and clarification of the negotiations outlook in order to sweep uncertainty away and enhance predictability in relation to the United Kingdom’s vote to leave the EU, and Chancellor Merkel noted that this issue is a turning point for European unity and that the United Kingdom needs to clarify what it wants to accomplish.

The two leaders also agreed to cooperate in efforts to stabilize the exchange market and confirmed their intent to continue efforts to reach an agreement in principle on the Japan-EU Economic Partnership Agreement (EPA) as soon as possible during this year.

The two leaders agreed on further collaboration by Japan and Europe to maintain the international order based on rule of law worldwide, including in Asia.

Chancellor Merkel inquired Japan’s opinion regarding the final award in the arbitration proceedings as to the disputes between the Philippines and China regarding the South China Sea, announced on July 12, and Prime Minister Abe mentioned that Japan issued an official comment stating that the award is legally binding and that the parties to this case are required to comply with the award by the Arbitral Tribunal. Chancellor Merkel explained that EU member countries are currently discussing the Tribunal’s award on this case.

The two leaders confirmed their intent to cooperate so that the visit by H.E. Mr. Joachim Gauck, Federal President of the Federal Republic of Germany, to Japan on an invitation from Prime Minister Abe in May, provides an opportunity to further strengthen the close relationship between Japan and Germany.