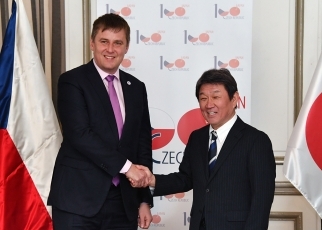 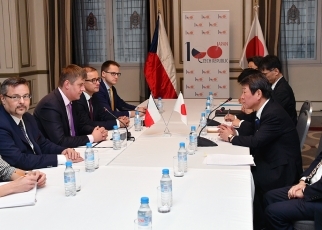 On Sunday, December 15, commencing at 5:15 p.m. (local time; Monday, December 16, 1:15 a.m. JST) for approximately 40 minutes, Mr. MOTEGI Toshimitsu, Minister for Foreign Affairs of Japan, who was visiting the Kingdom of Spain to attend the 14th ASEM (Asia-Europe Meeting) Foreign Ministers’ Meeting, held a meeting with H.E. Mr. Tomáš Petříček, Minister of Foreign Affairs of the Czech Republic. Some highlights of the meeting were:

1. At the outset, Minister Motegi conveyed his condolences to Minister Petříček for the six people who lost their lives and several people who were wounded in the tragic shooting that took place in Ostrava. Minister Motegi stated, “The Czech Republic is a partner sharing fundamental values, such as freedom, democracy, and the rule of law, and I am pleased that the bilateral relations are developing in a wide variety of areas. Next year marks the 100th anniversary of Japan-Czech Republic exchanges, and I intend to make it an opportunity to deepen mutual understanding between the peoples of Japan and the Czech Republic.”

In response, Minister Petříček concurred with Minister Motegi’s remarks and stated, “Japan is an important partner with common values, such as democracy and human rights, and I will strive to strengthen the bilateral relationship toward our shared goal of the 100th anniversary.”

2. Minister Motegi expressed his expectations for strengthened bilateral relations, stating: “Economic relations between the two countries have made steady progress. Initiatives are being undertaken to diversify and expand the economic relationship, such as the recent ‘V4 plus Japan’ IT Seminar organized by JETRO. I will seek to make next year’s 100th anniversary an opportunity to further develop such bilateral cooperative relations.” In response, Minister Petříček welcomed the investments from Japan, and expected that the entry into force of the Japan-EU EPA (Economic Partnership Agreement) and SPA (Strategic Partnership Agreement) will further strengthen the economic relationship.

3. Minister Motegi stated that Japan attaches importance to working with the Visegrad Group (V4), which has been increasing its presence in the EU, and looked forward to the leadership of the Czech Republic as the V4 Chair. In response, Minister Petříček stated, “The V4-Japan cooperation is a matter of priority for the Czech Republic, and we hope to further deepen the cooperation.” The two ministers exchanged views regarding future “V4 plus Japan” cooperation, and confirmed continued cooperation for political dialogues, assistance for the Western Balkans, and supports for joint research in science and technology.

4. The two ministers exchanged views regarding the situation in East Asia. They also exchanged views regarding North Korean issues, including the recent situation, and shared the view on continuing to work closely toward the complete denuclearization of North Korea, including full implementation of United Nations Security Council resolutions. In addition, Japan sought the Czech Republic’s understanding and cooperation for the early resolution of the abductions issue and obtained its support.