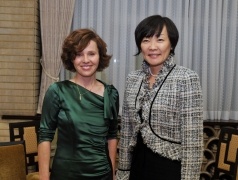 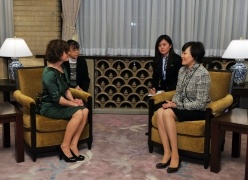 On February 5, Mrs. Akie Abe, spouse of the Prime Minister of Japan, held talks with Mrs. Friedrun Sabine Burkhalter, spouse of President of the Swiss Confederation.

Two ladies talked in friendly atmosphere. Mrs. Abe welcomed H.E. Mr. Burkhalter, President of the Swiss Confederation and Mrs. Burkhalter’s visit in Japan, on the occasion of the 150th anniversary of the establishment of diplomatic relations between Japan and Switzerland. In addition, Mrs. Abe thanked Switzerland for the support provided at the time of the Great East Japan Earthquake. Mrs. Burkhalter expressed her hope that the visit of this time will deepen two countries’ bilateral relations.

Japan and Switzerland, which celebrate 150th anniversary of the establishment of diplomatic relations, will organize several memorial events throughout the year 2014.

During her visit to Japan, Mrs. Burkhalter visited Meiji Shrine, Yamatane Museum of Arts and Kamakura and had a chance to experience traditional Japanese culture. Her visit to Japan was a great opportunity to further deepening the 150 years’ relationship of trust and friendship between Japan and Switzerland.