The 3rd Japan-Switzerland Joint Committee on Science and Technology Cooperation 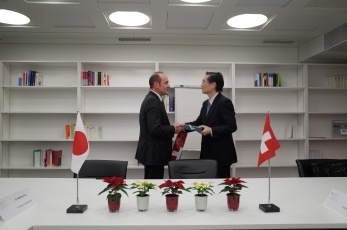 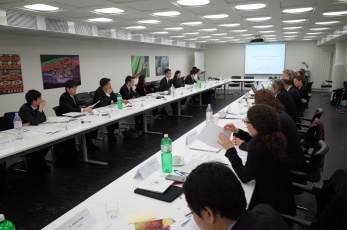 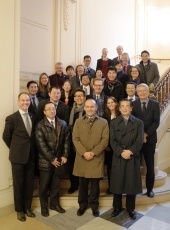 Bern, 12.12.2014 – State Secretary Mauro Dell’Ambrogio opened the third Japan-Switzerland Joint Committee Meeting on Science and Technology Cooperation. Co-chaired by Mauro Moruzzi, Ambassador, Head of the International relations Division at State Secretariat for Education, Research and Innovation (SERI) and Makoto Katsura, Ambassador for Science and Technology Cooperation at the Ministry of Foreign Affairs of Japan (MOFA), the meeting was held in the presence of high-level representatives from research institutions, funding agencies and the governments of both countries. As one of the milestones concluding events to mark the 150th anniversary of diplomatic relations, it provided an opportunity for both countries to reiterate their commitment to intensifying cooperation in the fields of research and innovation.

One of the key instruments in the programme are annual bilateral workshops, held alternately in Japan and Switzerland, in fields in which both countries excel such as nanoscience and energy research. The University of Zurich, as Associate Leading House, is currently preparing a workshop on healthy ageing in collaboration with Japan Science and Technology Agency (JST) and Chiba University; this will take place in Japan in 2015.

Under the current phase of the bilateral programme, a new instrument to encourage mobility among young researchers has been launched by the ETH Zurich, the Leading house in the bilateral programme, together with the Japan Society for the Promotion of Science (JSPS). This program encountered a great success and there are actually 7 Swiss researchers in Japan and 12 Japanese researchers who came to Switzerland for short-term research stays. Several other instruments also exist in both countries to promote academic exchange. In Switzerland, for example, federal scholarships have been available at both PhD and post-doc levels since 1961. As for Japan, JSPS postdoctoral fellowships have been awarded to young Swiss researchers since 1988.

Besides the activities developed under the current bilateral funding programme, direct cooperation between academia and research institutions is also intense, as demonstrated by the testimonies of the members of the research institutions at the meeting. For instance, the University of Bern and the Japanese High Energy Accelerator Research Organisation (KEK) presented their partnership in the field of particle and nuclear physics. The topic of landslide and sediment disaster risk management was also addressed by representatives of Switzerland’s Federal Office for the Environment (FOEN), the Swiss Federal Institute for Forest Snow and Landscape Research (WSL), and the ETH Zurich, along with representatives of Japan’s Ministry of Land, Infrastructure, Transport and Tourism (MLIT) and the Public Works Research Institute (PWRI). Both sides confirmed the importance of cooperation to develop technology in this field.
More generally, the Swiss National Science Foundation stated that between 2009 and 2013, 81 mobility instruments involving Japan have been funded at a total of CHF 7.5 million, and 236 project teams (CHF 97.7 m) have worked with colleagues in Japan.

Contacts between the two countries in the field of innovation have also recently been strengthened. An arrangement fostering cooperation in innovation was signed during a 2013 symposium held in Spiez by the Commission for Technology and Innovation (CTI) and the Japanese Ministry of Education, Culture, Sports, Science and Technology (MEXT).

By highlighting the extensive and excellent relations in the field of science and technology, the third Joint Committee Meeting was one of the events concluding a year of celebrations and high-level visits to mark the 150th anniversary of diplomatic relations. At the event both the Japanese and Swiss delegations reiterated their commitment to building up bilateral relations.