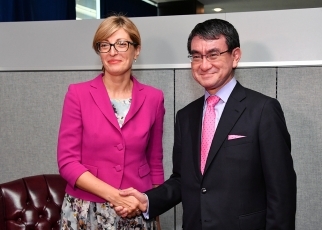 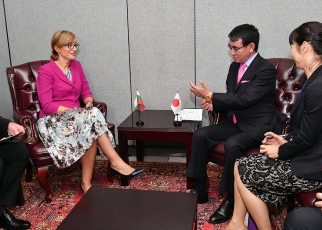 On Thursday, September 27, commencing at 2:30 p.m. (local time) (3:30 a.m. Friday, September 28, Japan time), Mr. Taro Kono, Minister for Foreign Affairs, during his visit to New York to attend the 73rd session of the United Nations General Assembly, held a meeting with Ms. Ekaterina Zaharieva, Deputy Prime Minister for Judicial Reform and Minister of Foreign Affairs of the Republic of Bulgaria. The overview of the meeting is as follows.

1. Minister Kono stated that Japan will further strengthen the bilateral relationship towards the “Three anniversaries” between Japan and Bulgaria in 2019. Deputy Prime Minister and Minister of Foreign Affairs Zaharieva also expressed her intention to cooperate with Japan as 2019 will be an extremely important year for Bulgaria as well

2. In addition, the two sides shared the view that they will promote concrete cooperation with regard to the support for the Western Balkans, as announced when Mr. Shinzo Abe, Prime Minister of Japan, visited Bulgaria in January this year.

3. Both sides reaffirmed that it is important for the international community to continue to ensure the full implementation of UN Security Council resolutions towards the denuclearization of the Korean Peninsula.

Page Top
Back to Japan-Bulgaria Relations