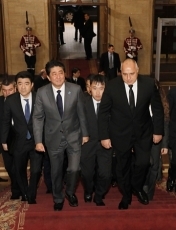 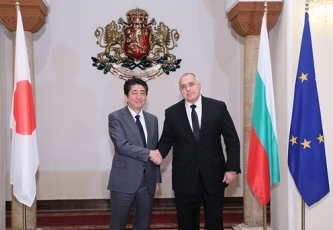 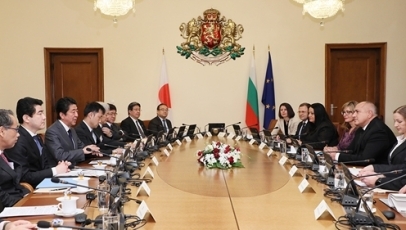 (b) Both leaders agreed to work to further enhance cooperation, particularly in the area of people-to-people exchanges. In addition, Prime Minister Abe noted that Deputy Prime Minister Tomislav Donchev will be invited to Japan.

(c) Prime Minister Abe stated that a JETRO mission will be dispatched to Bulgaria by the end of the year to promote economic exchange. Prime Minister Borissov responded that Bulgaria is an excellent gateway to the EU and ranks among the top countries in the EU by economic indicators. Both leaders agreed to work on further enhancing the bilateral economic relationship.

Given the challenges to the international order based on the rule of law, both leaders confirmed that the most pressing foreign policy issue with respect to relations between Japan and the EU is taking joint action to preserve and strengthen that order, based on the fundamental values shared by Japan and Europe. In this context, Prime Minister Abe emphasized that it is important for Europe to maintain unity, strengthen solidarity and continue to steadily promote integration. The leaders shared the view that, amid the rise of protectionism around the globe, the conclusion of negotiations on the Japan-EU Economic Partnership Agreement (EPA) demonstrates to the world the unwavering political will of Japan and the EU to keep the flag of free trade waving high. They agreed to continue to work together towards the early ratification and entry into force of the EPA.

4. Assistance for the Western Balkans

(b) In response, Prime Minister Borissovwelcomed the initiative.

Reference: The Western Balkans Cooperation Initiative
Created with the objectives of supporting socio-economic reform in the Western Balkans aiming to become EU members, and of promoting cooperation in the region. Specific measures include the establishment of a new post, the Ambassador in charge of the Western Balkans at the Ministry of Foreign Affairs and strengthening dialogue with Western Balkan countries. Japan also plans to share its knowledge and experience in the areas of disaster prevention and the environment, which are major challenges for the region, through the dispatch of experts and holding seminars. The dispatch of a JICA mission is also being planned for 2018 to identify and formulate new cooperativeprojects.

Prime Minister Abe stated that Japan wishes to work closely with Bulgaria to address international challenges, particularly North Korea, which poses a threat to the whole of Europe in various ways, including its launch of ballistic missiles with a potential range as far as Sofia. The leaders agreed that it will never accept a nuclear-armed North Korea and affirmed that they will maximize pressure on North Korea by all means available, including full implementation of the latest United Nations Security Council resolutions, to make North Korea change its policies. Prime Minister Abe also requested understanding and cooperation for the prompt resolution of the abductions issue, and received the support of Prime Minister Borissov.

Page Top
Back to Japan-Bulgaria Relations