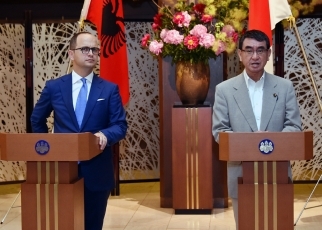 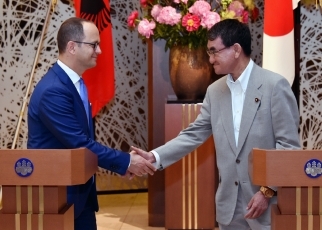 On June 5, commencing at 7:15 p.m. for approximately 70 minutes, Mr. Taro Kono, Minister for Foreign Affairs, held a meeting over dinner with H.E. Mr. Ditmir Bushati, Minister for Europe and Foreign Affairs of the Republic of Albania. The overview of the meeting is as follows.

Minister Kono stated that he was pleased to meet with Minister Bushati again in Tokyo following the meeting held on the sideline of the Munich Security Conference in February this year. He also expressed his hope to further advance the cordial bilateral relations with the momentum of Minister Bushati’s visit to Japan. In response, Minister Bushati welcomed the opening of the Embassy of Japan in Albania last year

, and extended an invitation to Minister Kono to Albania. In addition, Minister Bushati stated that he hopes to advance the cooperation between the two countries together with Minister Kono.

Minister Kono explained that Japan attaches importance on Albania, which is a key to the peace and stability of the Western Balkan region, and will continue to support Albania’s economic and social development under the “Western Balkans Cooperation Initiative.” He also expressed hope for promoting the economic relationship. Furthermore, he announced that the Ministry of Foreign Affairs of Japan has recently reviewed its travel and warning information and the threat level of Albania is now set at “level 0.”

In response, Minister Bushati expressed deep gratitude for Japan’s assistance. He also stated that he hopes to promote investment, tourism and people-to-people exchanges through the “Western Balkans Cooperation Initiative.”

The two ministers exchanged views on the situation in the Western Balkans as well as various challenges facing the international community, including North Korea. They agreed that Japan and Albania will work closely together to deal with these challenges.