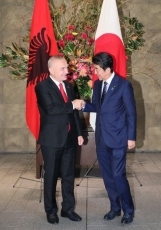 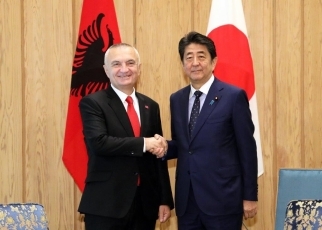 On October 24, commencing at 11:40 a.m. for approximately 20 minutes, Mr. Shinzo Abe, Prime Minister of Japan, held a Summit Meeting with H.E. Mr. Ilir Meta, President of the Republic of Albania, who is visiting Japan. The overview of the meeting is as follows. The meeting was also attended by Mr. OKADA Naoki, Deputy Chief Cabinet Secretary, and others from the Japanese side, and by H.E. Mr. Gjergj Teneqexhiu, Ambassador Extraordinary and Plenipotentiary of Albania to Japan, and others from the Albanian side.

Prime Minister Abe expressed his appreciation for President Meta’s message of condolences. Prime Minister Abe also stated, “Japan would like to enhance the bilateral cooperation in a wide range of areas.” and “I hope for further improvement of the investment climate in order to promote Japanese companies’ investment in Albania.” In response, President Meta expressed his gratitude for Japanese assistance, as well as expectation for Japanese investment and further development of cooperation in economic field. President Meta emphasized his intention to work for increasing Japanese tourists to Albania. In addition, the two leaders exchanged views on economic cooperation projects.

Page Top
Back to Japan-Albania Relations