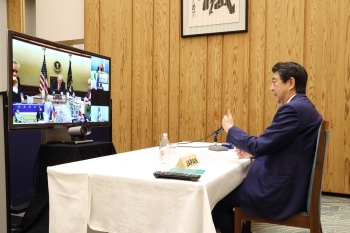 On April 16 (Thurs), from 9:30 p.m. for approximately 80 minutes, Prime Minister of Japan ABE Shinzo attended the G7 Summit Video Teleconference Meeting concerning the novel coronavirus disease (COVID-19). The summary of the meeting is as follows. This meeting was called for and hodted by the United States, the G7Presidency this year, followed by the last meeting held on March 16.

1. The participating G7 leaders exchanged views on the economic conditions of each Member State as well as preventive measures against the spread of COVID-19.

2. Prime Minister Abe elaborated on the current state of Japan’s response, such as the government’s large scale and bold economic policy and extending the national state of emergency to all prefectures, while emphasizing the following four points, supported by the participating countries.

(1) The short term importance of developing and distributing medicine; in particular, the expansion of international clinical studies on Avigan, which was developed as a medicine for new strains of influenza.

(2) The importance of support for countries with fragile medical and healthcare systems.

(3) The importance of sharing support and information regarding this crisis internationally in a clear, prompt, and transparent manner.

(4) The importance of taking the response to COVID-19 as a lesson to strive for bolstering infectious disease prevention systems worldwide and building economies that can withstand a crisis.

3. During the meeting, the leaders of each country presented their respective progress since the video teleconference meeting last month and reached a consensus on matters such as the necessity of developing a vaccine through international cooperation between the public and private sectors and the importance of providing aid to Africa, Southeast Asia, and island countries. They also agreed on the importance of preparations for safely recommencing economic activities within each country after the current situation settles.

4. With the international community required to make a joint effort in responding to COVID-19, the G7 Member States were able to demonstrate their united approach in this meeting.